After knowing I would soon live in my own house with its lovely view, the old house seemed a bit depressing. It’s an OK house but doesn’t have an awful lot of atmosphere, and the views are as dull as they get. It could be so much better! So I had decided I should move sooner rather than later. No matter that I am still paying rent for the old place, no matter I don’t have internet in the new house yet. Let’s go there and enjoy it! So I had asked David if he was around to help me at some point in the second weekend of me having the key. And he said he was. He suggested we talk on the Friday to decide on day and time.

Friday came and he suggested Saturday 8.30. Eh, OK! But then I’d better get cracking. I needed him and his big Landie for the big stuff; I could hoover up the smaller bits later on my own. And one of the big things was a cupboard. I wanted my living room to look living room-ish until the end; I didn’t want to sit in a cave-like hole, so I had kept things in that cupboard until the end. I had also used it to put stuff from other places. It was a bit busy in there! I figured the bed was a doddle; pull the sheets off and tadaa, ready to go. But I made sure to empty the cupboard on the Friday. I also packed up all my clothes (except what I would wear the next day), and most of the kitchen. I did another round of box-delivery on the Friday evening. On the way back I brought Phil’s wallpaper stripper back; he needed it himself.

The next morning I was up early, packed up the bed, cleaned and hoovered the room, and tried to take the kitchen table apart. The latter failed; one screw had been stripped and I couldn’t get it out. And you had to take all legs off in one go! Just doing one or two wasn’t an option. Then David arrived.
He was impressed by the emptiness of the house. We first loaded up the cupboard. I left space for the washing machine, the oven and the microwave. And then the kitchen table. And a bicycle. We then tried to put the bed into my car; it was raining! Best not to soak the mattress. It fit! Then we filled up the last spaces with side tables, boxes and plants. Ready to go! 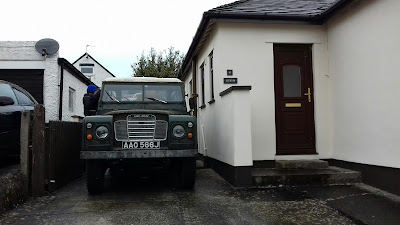 David's Landie coming to my aid

We drove down and unloaded. The cupboard went nicely into the kitchen (its temporary home).  The kitchen table didn’t! It just wouldn’t fit. Oh dear. We left it in the master bedroom. But David didn’t have much time so we went back. Next round! This time it was the washing machine, and my other bicycle. And I had a last side table. We unloaded all of that, and then had a coffee. David liked the house! And the garden. Of course. He then helped me to move the wardrobe to the storage space; it had so far been in the living room but it was best to keep that furniture-free.

Then David left. I did some first things; put things where they belonged, and such. There’s always so much to do! I worked until I was hungry, and then had some lunch. Then I went back to the old house. I had some last packing and cleaning to do!

I filled some holes from nails, and cleaned where things had been, and gathered all the plants (including those living outside). I worked my way from the front of the house to the back. In a way, not so good; that left the kitchen to the end, and that was the worst. Where the washing machine and fridge had been was pretty dirty! Slowly I worked my way through house and garage and left them empty and clean. When packing up the car I had taken a bet; I had some more cardboard boxes in the garage, and I decided i would try to fit them in with the last bits and bobs. I hoped that would work! Otherwise I would have to unload again (they were at the bottom) and put them back and come back for them some other day. I didn’t feel like that! Luckily it worked out. It all fit! 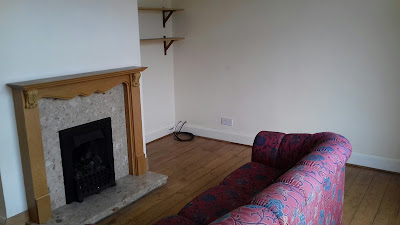 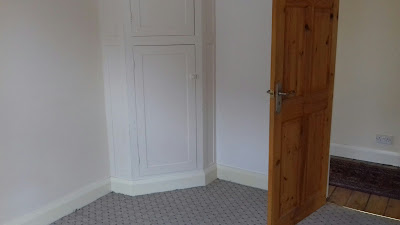 I was a bit sad the neighbour wasn’t in; I wanted to say goodbye. I left a pack of special beers with a message on his doorstep. Maybe I’ll see him when I come back to do the last meter readings (should be what they are now; I switched off the boiler and there’s no electrical equipment left there) or have the sofa picked up.

Very tired I drove back. I unloaded again. I was also very hungry! But knackered. I decided to bike to the nearest small supermarket. I didn’t want to be on my feet! And after coming back from the shop I did keep getting distracted by things to do but in the end I managed to have dinner. As the kitchen table couldn’t go into the kitchen and I was too tired to carry my food one floor up to eat it at the window I just used the workmate as a kitchen table. Less than comfortable! But it was the first meal I cooked in the new house! 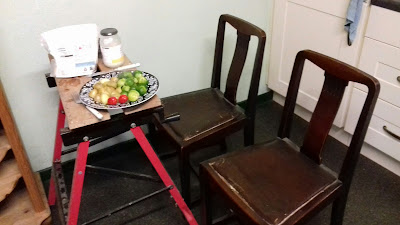 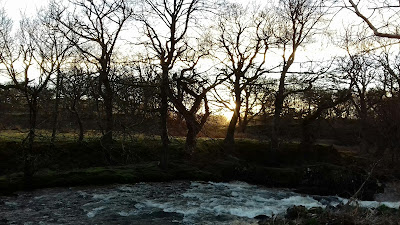 Watching evening fall over the river

I kept doing house things until I went to bed. I was knackered! But I kept seeing boxes when I closed my eyes. Oh well. In the end I slept. And the next morning I took my breakfast to my breakfast bar and ate it with a view! It was lovely! I love this house already! 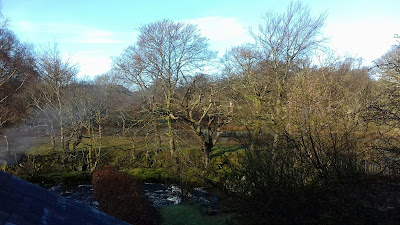 The river seen from my breakfast bar