I had decided it was time to retire my trustworthy little old car, which, due to its anomalously coloured bonnet, was sometimes known as Silverbonnet. A bit sad, really! I like its quirkiness. But I don't like the fortunes it costs to have it welded each years. So I had bought a new one, but this did mean I had to scrap the old one. But when? I thought I had time, but then I realised on Friday the MOT would run out on Wednesday the next week, and you can't take a car that has no MOT on the road, not even to drive it to the scrap yard. And I had to go to Edinburgh Mon-Wed, not knowing what time I'd be back. I clearly couldn't do it after the weekend! And scrap yards tend to be closed on Sundays. It dawned on me I had only two chances of scrapping the car without breaking the law: do it on Saturday morning or asking help from friends.

I have spiffing friends. David and Guy were quite willing to sort me out. David for driving the thing to the scrap yard and Guy forbringing him back. Lovely people! And it's most appreciated. I just figured I had got myself into this pickle and should get myself out. I decided to just get up early on Saturday and sort it. There was time! I had to be at the Clogwyn hut to meet up with my old friends from the York Caving Club at 10; it's just under an hour from where I live. The scrap yard opened at 8. Possible!

I got up early, took everything I wanted to keep out of the car, packed my caving kit so I could leave immediately after coming home again, and set off. I had seen on internet where the scrap yard was. I hadn't checked streetview; it seemed evident. And as the scrap yard wasn't far my initial thought would have been to plonk the bike into the back and rise that back, but the weather was atrocious. I would be blown off that bike all along the way. Plan abandoned! I googled some taxi companies in the surroundings and set off.

I couldn't initially find the place, but I found a bloke in an unrelated company willing to show me the way. Soon I was parked on the weighing bridge! Oh dear. End of an era. This little car has served me well for six years. 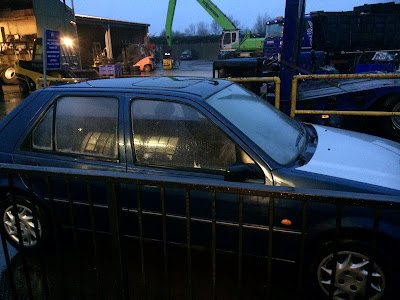 The little car on the weighbridge 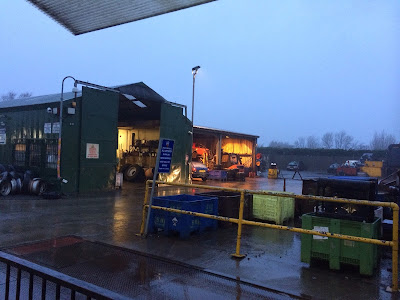 The last time I would see it; notice its bum sticking out from a shed

A friendly man sorted out the paperwork and told me the car was worth a staggering £18. Oh well. That would pay for the taxi home! While he was looking things up I phoned a taxi company; I didn't have much time to spare. And then I got all the papers and saw another employee drive my little car away. The last time I would see it! Thanks Silverbonnet for the good times! But I had little time to dwell on things. The cab showed up and soon I was home, about to set off on my first trip with my new car. Which would be an adventure in its own right!
Posted by Margot at 10:00