If your commute is 45 minutes one way, and an hour the other, you do start to wonder if it could be less. Especially if you've been doing it on a 20kg mountain bike with a too large frame you bought somewhere in the nineties for some £15. I know the most important component of a commute is the commuter, but these don't change all too fast. The commuting vehicle can change instantaneously! So I decided it was time for a new bike. I wondered how I would go about it. Buy a new one? With the Cycle to Work scheme, maybe? Or a second-hand one from a shop? Or one from the internet? I decided on the latter. I think it is generally silly to buy things new (unless they are things like socks and toothbrushes and such) so the first option was discarded. Then I figured people who sell their stuff themselves are often not looking for a profit. They just want to make space! So I decided to hit internet. 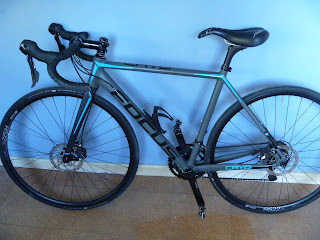 I saw lots of bikes. I went for road bikes; mountain bikes were exactly what I was tryong to avoid, and tour bikes tend to hardly be sold second-hand. People wear them out! But roadbikes are like treadmilss and exercise bikes: people buy them because they have decided they have to get fit, but then they can't bring themselves to actually do that, so they sell the bike. Lots of them online! Barely used.

I looked on eBay, gear exchange UK, and and Facebook Marketplace. I didn't see all that much on eBay, and didn't like the auction format for this purpose. I struggled a bit with gear exchange UK as I had issues finding out where the various bikes were. I had to try them, so it had to be nearby! But I also struggled with Facebook Marketplace. I could see the item, but for only one bike I managed to find the orignal post. That has messages with it; that's so useful! A lot of people just say in the description 'roadbike, in good condition' or something like that. But that's not enough! What's the frame size, for instance? I knew I didn't want any bike bigger than a 54 cm frame size. In the comments you find out if someone's already asked. And whether the thing has already sold. If it says so in the comments, I can imagine people don't bother to mark the item officially as 'sold'! So I did a bit of messaging around; is the bike still available? What frame size? The first inquiry that went beyond 'is the bike still available?' 'no' went a bit iffy; that's the one I had found the original post of. It said in the comments it was a 55cm frame. But the seller messaged me it was 53! He knew I was small. I smell a rat.

I also wondered if I would go for cheap and cheerful or expensive and high quality. I figured I had better go for the latter as I would need it a lot. And the whole point of this bike would be that it would make things easier! So I messaged a lady who had quite a fancy one on offer. Disk brakes, low weight, the works! And she immediately mailed back, in a kind way, and could see me that afternoon. So I went!

She opened the door and handed me the lightest bike in the world. I gave it a small spin! She lived on a hill so I could try the gears. I wasn't quite sure in the beginning how they worked but these things tend to be self-explanatory. And it immediately fit! I didn't have to adjust anything. It felt good! And that hill worked. I didn't take it for a long ride. I like to decide quickly, even if I'm making a big purchase like this. This is not a low budget bike!

I decided to go for it. Sorting ot the payment digitally took longer than testing the bike. And then I drove it home! I have a new toy! I'm excited.