Onwards with the garden

After the whirlwind of my sister's family in the garden the tone had been set. Now I had to keep it up! I started with the big pile of garden waste that had been put in front of my house. As I don't own that terrain I prioritised that! I cut it up and put it in the bin. I later found out that in order to have your garden waste bin emptied you need to pay extra; you pay £33 per year or any part of a year. I think I'll go for that! Better than lugging stuff to the recycling centre. And I think having a compost heap big enough do deal with all my garden waste may be a bit much yet. Maybe next year!

Then i had to give the actual garden some attention. I had a million other things to do too, such as preparing for an upcoming field trip, doing two weeks worth of Welsh homework, demolish a ceiling, sorting my administration, doing the laundry, and lots more things, but I really couldn't let my family's good work go to waste. I snapped into action!

While my sister was still around I had bought a 10m extension lead for the lawnmower. Nora had had to stop mowing as the cable didn't reach! But with the extra 10m I just made it to the back of the garden. I started with that. It immediately looked better! 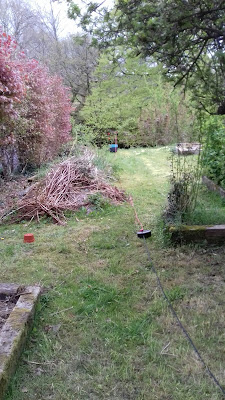 The lawnmower just makes it to the back!

I then attacked a few more brambles. They threaten to take over the garden! I don't want that. I created a new pile of garden waste.

Then I planted some seeds. Two raised beds had been dug; I had to now use them. Nora had given me some radish seeds the previous time I had been in the Netherlands; I had figured it wasn't a good idea to plant them just before moving house. But now the time had come! I had also bought some seeds in a shop. I had wanted potatoes, but hey didn't sell those. I settled for carrots, leeks and Brussels sprouts. Will they grow? I have no idea! I am the most untrained gardener in the world! But one has to start somewhere. I started there!

I think in the coming months I should see how the veg goes, and plant other beds with nice low-maintenance floor-covering plants. There seems to be a garden centre in Tregarth. I should pay a visit!
Posted by Margot at 08:54