Normally, I think that when I have done a day on the office, I've stared at a computer screen long enough. And at home I want to do other things. Be in the garden! Read the newspaper! Repair something! That sort of stuff. But things have changed. I still like to be away from screens for a fair part of the day, but, as with everybody else, my social life is now online. So screens! So what do I do?

I've gone back to using Facebook. I had sort of let that account go dormant, but now it's such a good place to be! The place to catch up, come together as a village, see how distant friends are coping with the lockdown, etc. And the Bethesda Facebook group has spontaneously started a photo competition. Just for the heck of it! That's nice.

I tried to make Skype work on my computer but I failed. But it still works on my phone. And the phone has fewer possibilities than the computer, but well, it'll do. I also now use things like FaceTime and Whatsapp video more. The only way to see friends and family! So I had a coffee break with my colleague Lynda on FaceTime, I joined my sister on a walk through Helsinki, and had a chat with a friend holed up in Amsterdam. 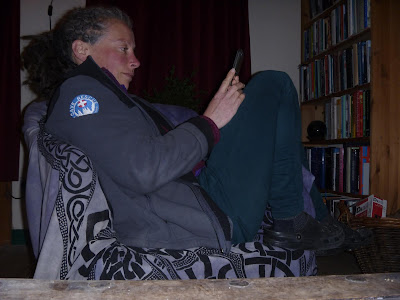 This is what me socialising tends to look like these days

I was also supposed to go see a Welsh language drag act (what do you mean niche?) with my friend Fiona. That didn't happen of course! But we decided to have a drink together anyway that evening, over messenger. And we did! And we hadn't discussed this beforehand but we were both dressed at our most flamboyant. Fiona thought she even detected make-up but that was imagination.

I have a virtual dinner lined up still, and another virtual beer with another friend. I've been dragged kicking and screaming into the 21st century. I suppose it's very good to learn all these skills as they're very useful, but still, I will be glad if I can do my drinks and dinners and classes and nights out with people physically present! 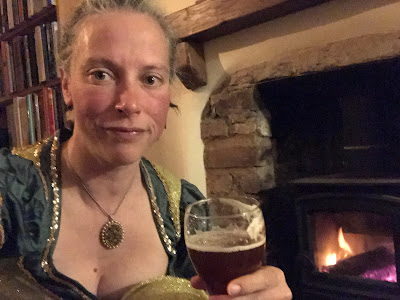 Me on what should have been a girls' night out
Posted by Margot at 08:18