I had inherited a mint green cupboard for hanging clothes in from Rose. It was somewhere I didn't think was a good place for hanging clothes. It had originally been a door from the landing (which wasn't originally a landing) to the garden. It must have been a very narrow door! It was only some 70 cm. But if I didn't want to use it as a door, nor as a dangly wardrobe, I would have to do something else with it. And I went with a classic cupboard. Just put shelves up!

The first thing that happened was that Jitske pulled out the rod and its accoutrements. Then I filled up the holed with polyfilla, and painted it. Then it was time for structural work.

I popped to the DIY shop and bought wood. Small rods for screwing into the wall, and planks for laying on top of these. And then it was a case of cutting everything to size and fix it in position. The rods were quite easy. The planks a bit less so. I have no right angle in my house so the planks in the back needed to be a bit longer than the ones at the front. And they seem to always have to be a bit differently sized than I thought after measuring. And they were big buggers! I brought in the workmate and the bow saw and set to work. And on New Year's Day I managed to get to sorted! I have a cupboard. I do want to oil the wood like I've oiled pretty much all the other wood, but that can be done in between things. The hard, noisy, messy work that needs a lot of space is now done!

Oh and I need to paint the door frame... oh well. I might go for green! But not mint green. 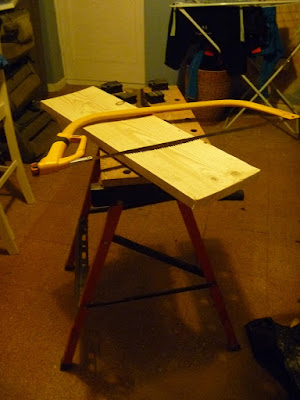 In a way good that the bedroom isn't a bedroom yet 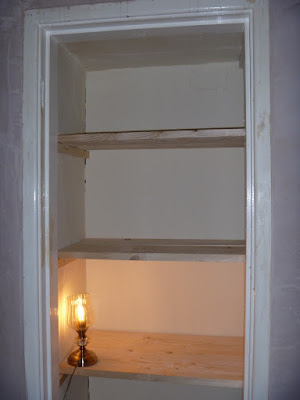