It’s my first winter with a living room! And the living room has a wood burner. I still don’t burn an awful lot of wood but altogether it adds up: my basket with kindling was almost empty. I’ve almost burnt all the slats from the plasterwork! So it was time to make some more.

I have plenty of wood from the work that has been done on my house. And some of that is planks! Fairly easy to chop these into kindling. But that does require an axe. Rose had left hers, but it was barely sharper than a brick. So I first took my Dremel out and sharpened it. Then I went to the garage to set to work! And I used a piece of roof that was too big for the stove as a chopping stump.


It’s not much work, really! Even with my crap aim. In no time did I have enough to last me a while! I decided to also saw some former fence posts. The garage is tidier again, and I’ll probably have kindling for the rest of the winter! 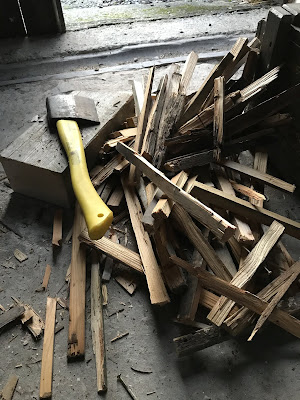