I'm still having fun with my small mine mission! And I had two in mind that are a bit of a distance away. They could be done in one go. One was Cwm Bychan which I had once misidentified; on the way there I had accidentally visited Ochrfwsoglog. But in that valley there are actually two mines: the other one was Afon Wen. So I had this long term plan to walk to Afon Wen, then Cwm Bychan, and then I would be quite close to the ridge; I could scramble up and then walk down over yr Elen, the fist hill you see when you approach Bethesda from Bangor but which I have never walked. The map shows no path on it, but I think that's not quite what the actual situation is!

I had intended a walk with Chris. He was up for just that one! Even though I would find out later he didn't quite have the same mines in mind.

As the days were short we set off at 8AM. And we walked into the valley. We got to the sheep fold where the path goes vague and then onwards. We had to cross a lot of streams, and quite soon Chris slipped doing just that. He hurt his leg! Oh dear. I wondered if that was it. Would we have to go back? But we had a coffee break there and then, and after that Chris said he was OK to go on. So we did! 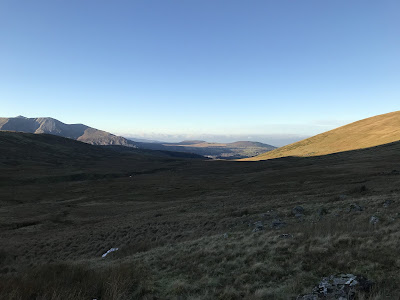 How the day started

Without further incidents we got tot Afon Wen. And it was such a cool little mine! Ochrfwsoglog was just a dent with a spoil heap, pretty much, but this mine had a clear pit with vertical walls, and a building, and a tramming level with spoil heap; it was small scale but it was lovely! And it was set in a beautiful gorge. And what was more; from that side of the valley we could see a path lead off on the other side. We could take that! It would go in the approximate direction of our next mine. 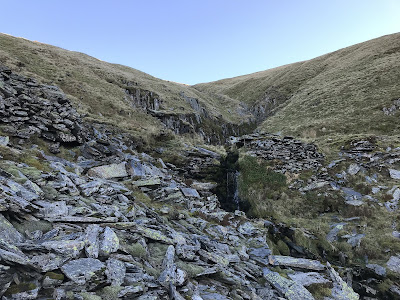 The mine for a small distance 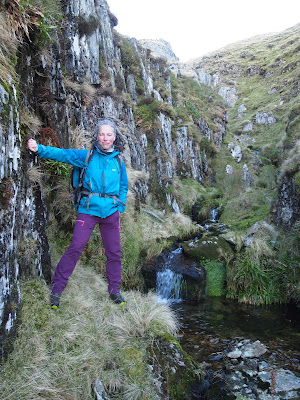 The gorge. Pic by Chris 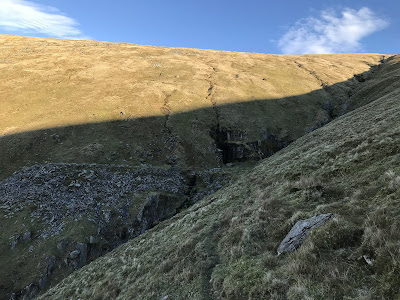 The mine from the other side of the valley

We took it. And lost it where we looped around the front of the hill. We just kept going without path, pretty much being blown out of our clothes. But then we dropped down to the valley floor where the mine was. But by then we were hungry so we had lunch.

After lunch we looked at the mine. Just a small pit and a spoil heap! But also a little building with remains of a hearth. And a file in it! When we had protographed that we were good to go back down. We would leave yr Elen. Too risky with Chris' leg! And it turned out he had been thinking of a mine much closer to the ridge. We would leave that to another day too! And that was good; when we crossed the stream in this valley Chris managed to hurt his leg again. But he was still good to just walk back. 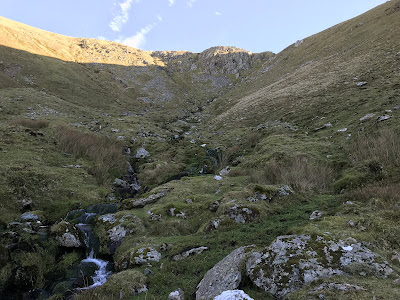 The valley the mine was in 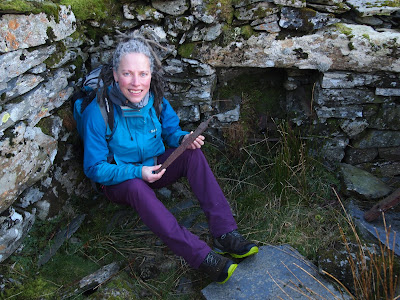 Me in the Cwm Bychan building. Pic by Chris. 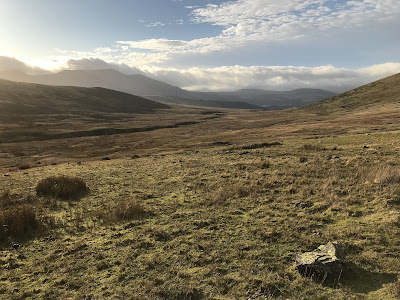 Afternoon light on the way back

While we walked back the weather turned. It had been beautiful and sunny but now the clouds came in. But it stayed dry! We had another tea break and then made it back to Bethesda. A good walk! But I hoped Chris would be OK the day after!
Posted by Margot at 07:14