When it was first published, I was ten. Too young! And now I am in my forties and I have finally read it. The handmaid’s tale! I suppose the combination of TV series and sequel sparked new interest. It is actually my mother’s copy! She had finished it and given it to me. And I wasn’t getting through it very fast. Until I took the train to the Netherlands.

So what did I think? I had heard a lot about it, of course, so the general outline of the plot was no surprise. But now I got to read how it was actually done. And for the few who haven't read it yet: stop here, this is a spoiler alert.

I liked the detail of the narrator's daily life. And I liked the flashbacks to her past, to a time we recognise. And I liked how the writer had made this societal change happen. The divide et impera, the not being able to trust anyone, the people who rebel and how that is crushed.

The one thing I did not like very much was the discussions the narrator has about how society panned out. She focusses so much on the falling in love! And that just didn't resonate with me. When I read the bits where the foundations of Gilead are lain I felt all sorts of things but nothing to do with missing falling in love. The frustration of not being seen as a full citizen, the forced dependence on others; yes that! And of course I have not lived for years and years in Gilead-like circumstances and don't know what I would feel like then, but still. This didn't work for me!

Altogether I was glad to have read it. Another classic done! 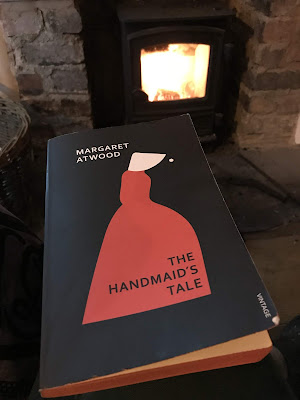 Finishing the book in front of the fire
Posted by Margot at 06:54