There was snow on the mountains and sun in the weekend weather forecast! One must seize an opportunity like that. Chris had said he wanted to scamper up Elidir Fawr. I decided to join!

He picked me up at eight and we parked at the bottom of the road to the reservoirs. A van pulled up seconds later. There I changed my boots. I had showed up in my 'regular' boots but it was snowy up there. Maybe we needed crampons! So I changed to my stiffer boots. And put the crampons in the bag.

While we were faffing, the van produced a bloke and a border collie, and the bloke was doing the usual boots-changing faff before a walk too. We had a bit of a chat! He had set off early in the morning from near Manchester to go on this walk. And the dog was clearly keen!

We all set off. It was so early that the sun was still behind the ridge. It was beautiful anyway! We walked to Marchlyn Bach and went up the ridge there. At the top of Elidir Fach we reached the snow. And stayed in it for a while! We went up to the top of Elidir Fawr, and decided to have a cup of coffee there. The bloke with the dog was there too! 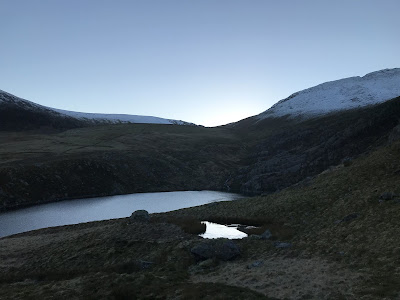 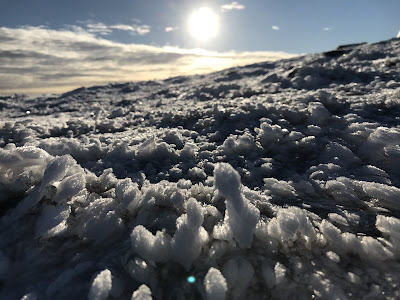 Rime at the top of the ridge 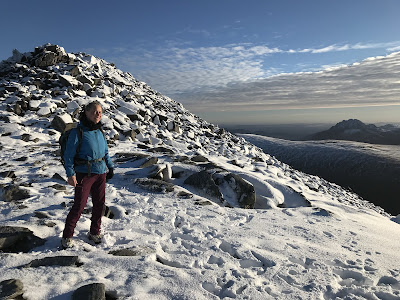 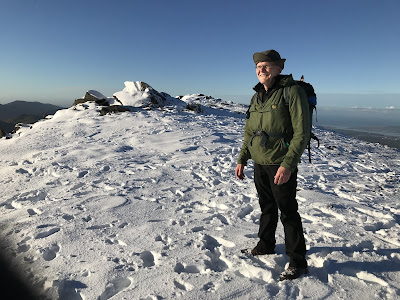 We then had to decide what to do. We went for looping around the reservoir. Then you end up on the ridge above Nant Ffrancon, and from there you can drop down again to the road. It's a nice modest loop! It's only 9 km but we had more to do. And it was so beautiful with the sun on the snow! We carefully descended again. We didn't put on the crampons but I was glad we had them. And we kept bumping into the man with the dog. We thought he would be a lot faster but he wasn't!

We had so far only seen the man with the dog, and a father with two children, but as the day progressed we saw more and more people. And dogs. Many people had noticed it was a good day for it!

When we came down Carnedd y Filiast Chris drew my attention to a rock with amazing trace fossils. It was probably trilobite tracks! They were beautiful. You saw the two rows of imprints of little legs. And this is some 500 million years old and you can still make that out! That was amazing. And when we came a bit lower I saw another rock with trace fossils; this time probably made by worms. Cool! 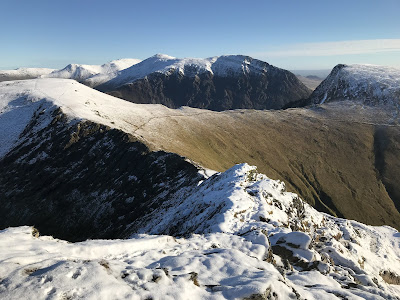 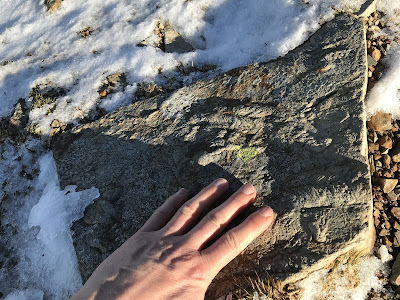 On the ridge, near where the path drops down back to the road going to the dam, we had our second break. And then we went back to the cars. We bumped into my mentee on the way! She had started a lot later so wouldn't do the whole loop, but she wanted to get some time in the sun as well. It was nice to see her!

It was lovely to get half a day in sun and snow! I hope we get a few more weekends like this before spring hits for real...