I had done two indoor Thursday nights (here and here) in a row. And that was in a way quite nice; we had a spell of rather crap weather. I barely biked for a whole week! But that was over and things had calmed down. So I went for another evening walk! And it was nice! Photography doesn't work as well at night but I think I managed to provide an impression. 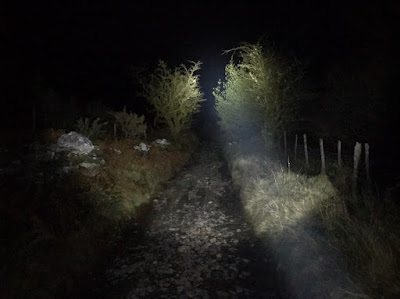 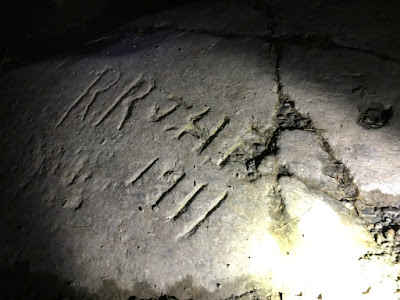 Some interesting 'graffiti' on the path

It's not as if I don't feel the blow of being bullied out of the ThursdayNighters anymore, but I must say I am liking my new regime of doing nice things on my own terms. I still love the mines (there is another trip coming up!) but now at least I lost the time spent faffing with people who don't tend to say anything interesting and who turned out to care less for me than I thought. It's not as if the ThursdayNighters individually never say anything worth listening to; I for instance had a lovely trip with in-depth conversation with Jason once. But if you put them in a group then not much comes out that floats my boat. Everything stays on the surface and after a few years you know exactly what these men think of certain mines and certain cars but you still don't know them and they don't know you. That is the sort of thing you try to close your eyes to when you're still hanging out with them, but of which you notice you are actually quite relieved to lose when you leave! So then I might as well do nice things on my own. Or with individuals. Better company!

I suppose the mismatch in interests had already done some damage before things came to a head; I still liked individual ThursdayNighters, but wasn't keen to needlessly extend mining trips with general hanging around and talking superficial things in groups. My decision to join the Christmas dinner was part a gesture of goodwill after almost quitting, and part a wish to see significant others. I suppose my lack of enthusiasm to hang around on parking lots and listen to banter had been noticed and hadn't done my position in the group any good. Oh well. Captain hindsight always knows exactly when to quit a club (or otherwise!) And now I can just do what I come to do and go to bed any time I want. And this is only getting better when the sour taste in my mouth fades into the background!
Posted by Margot at 09:23