On the ground floors, choosing colours for things such as skirting boards was easy. The old part of the house got green. The kitchen already had green skirtings, and green seemed a nice old-fashioned colour. The extension had colours on the walls, so the skirtings could be white. Sorted! But the top floor? That was trickier. One room had blue carpet so that could be ok with green skirting. But the other one had green carpet! Green on green is a bit much. What to do? Put blue there?

After some deliberation I decided to go in between. Some shade of turquoise for both rooms! I had the paint (‘Cape Verde’) mixed at the local B&Q, and soon started painting a skirting board. The first coat looked awful! I added two more. That was better. But still not quite even! Should I just accept that or add a fourth layer?

When after Christmas I had time again I continued with that paint. This time I first applied a base coat first. But the effect was the same! It looked pretty awful. 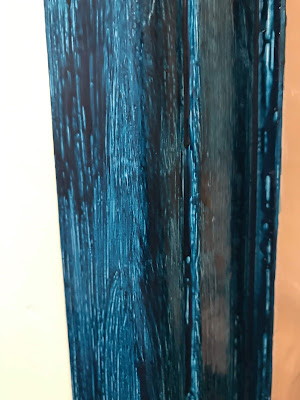 One coat of the Cape Verde paint 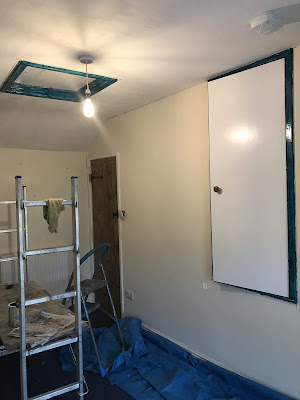 Work on the cupboard and hatch frames

When I saw it just was the sort of paint that doesn't cover very well I decided three layers was enough, so I could remove the masking tape from the skirting board I had already done. But when I removed it I pulled half the paint off too! Oh dear. So really, that not doing a base layer had consequences here. Oh dear! I wondered if I should try to get it all off, or maybe just touch up the patches that were now bare. Hm! Will have to ponder that. 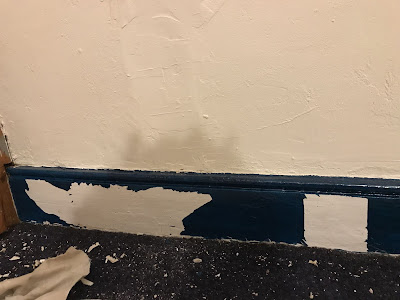 Lots of paint pulled off! Not sure why the one patch is so rectangular...

What I did decide immediately, though, was that I should stop using masking tape in combination with the Cape Verde paint. So I took the masking tape off the hatch and the cupboard. This time, not much paint came off! And I then painted the remaining coats just with care and, where needed, very fine brushes. It went OK! Progress was made...
Posted by Margot at 07:29