There’s a rather spectacular mine here in the vicinity that didn’t (much) make it to the blog! The Great Orme Copper Mine. And there is a reason for that. It is a show mine, open to the public, with a caving club dealing with the bits not open to the public. And I don't often visit show mines. And the associated caving club hadn't been very inviting! So I gave the entire mine a wide berth. The closest I had been when I had run around the headland during a race. But then I had my attention drawn to a talk about the archaeology of the place. It was Chris who alerted me to this and I decided to go!

It was on a Wednesday at half past 7 in the Telford Centre, which meant it connected quite well with my meet-up with Jenny in the pub, which is on the other side of the road. Chris appeared just when Jenny was leaving. We had a drink and went to the venue. It was very very busy! The organisation had to bring in more chairs. A good sign! And I also saw a chap from one of my earlier Welsh classes. It was nice to see him!

I was glad I had brought my glasses. Soon it started! And the presenter, Alan Williams, started. He mentioned people had been doing work on this mine, which must have been huge, had been done since forever, And people had tried to trace the copper in artifacts found around Europe. And not found it! But given that it was such a big place he had found that weird. That copper must have gone somewhere! 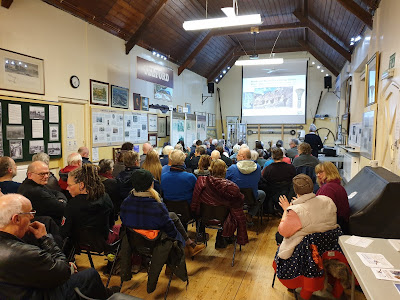 Pic by the Gwynedd Archaeological Trust

Traditionally, the copper had been identified using impurities. No copper/bronze artifacts are pure copper! But he didn't trust that work and wanted to redo it, and also use lead isotopes. Every mine will have its own isotopic signature! And so he set off sampling. And then comparing the results.

He found that quite a lot of artifacts did match the mine! And that not only explained where all the copper had gone, but also showed some trade routes. Copper axes from the Great Orme had been found all over Europe, but in what looked like patterns, mainly along the rivers.

It looks like around 1600 BC, North Wales was pretty much the centre of European technology! In the bronze age, copper was quite the thing. With tin, of course, which one finds in Cornwall. What was cutting edge technology thousands of years ago is now a lovely hobby in the Celtic fringe!

When it was done I had to shoot off so I said bye to Chris and left. But it had been good. I'm sure we'll do more talks of this series!
Posted by Margot at 09:13