Next step in ceiling work

The plasterboard was down, but that didn't mean the work was done. When Phil left I still had to do the tidying up. Which was quite a work! I first tidied up the big bits and brought them to the recycling centre. Then I wanted to do the smaller bits with pan and brush, but I felt I needed a face mask for that. I bought it but time ran out. But I decided I should not do that quite yet; more needed to come down. First of all, I had to try to get more wallpaper off. A lot of dust would come with it! So cleaning before that was done was silly. Also, I needed to take out a lot of nails, and some auxiliary bits of wood. That also would cause a lot of dust and stuff.

Sometimes I found half an hour to make some progress on that. And during that work I decided I also should take down all the slats that were nailed to the floorboards to give a bit of purchase to the Victorian plasterwork. I would keep them; they had dried for well over a hundred years! They would probably make lovely kindling. But it was yet again a lot of work. That was work for a Saturday. I have to keep moving the step ladder! But I got it done. And when all was down I took my broom and swept the ceiling. Bring it all down before the big clean-up starts! 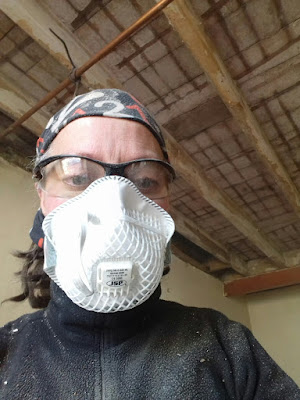 I was prepared this time 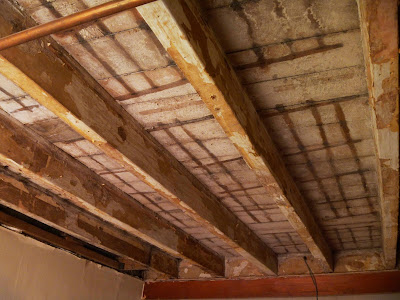 The ceiling after that round of work!


On a hot day I picked up all the wallpaper. And I took all the slats, broke them into workable size and put them in a bucket. Then I went through the entire room with pan and brush. Wearing a dust mask! It wasn't nice work but it made the room look a lot better.

Then I wanted to hoover the whole thing. Rose had left hers. She had told me the 'on' button was jammed and she wasn't sure how much longer it would last. Phil had warned me plaster dust clogs up hoover filters, but this hoover was sacrificial anyway, and it had washable filters. So I went for it anyway! I just made sure to keep an eye on the thing, and on the filter. I think she had already let things get out of hand on the filter front! But it was spring, after a wash it was dry quite quick. And the hoover clearly struggled but it did make a big difference! The place was starting to look a lot better.

The work wasn't done, though. There was still a lot of wallpaper on the beams! That wouldn't come off just like that. The neighbour suggested I try to just soak the wallpaper. It would probably come off. I tried it and wasn't impressed. I got back to the trusted steamer! And that worked a treat. It went rather quick! One disadvantage is that the steam left the wood a bit soft; at one point I was trying to scrape off some extra stubborn wallpaper, until I realised it was the actual wood. Oh dear! But well, it will get sanded anyway. 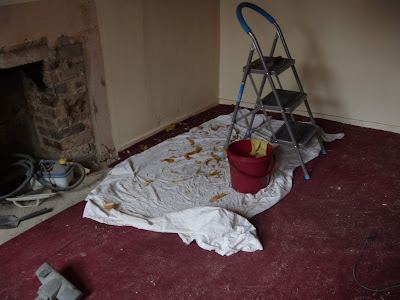 The floor was so clean! And with that sheet it may stay that way 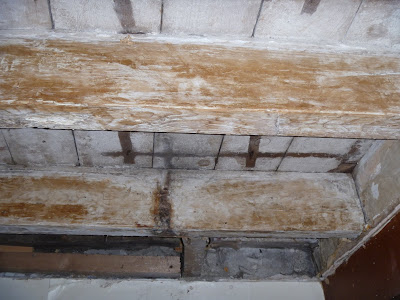 All the wallpaper's off this section! Only some whitewash left.


I did that work with a sheet underneath. I suppose I should get a bit tarp out of the garage and use that instead. It's bigger so I don't have to move it around too much! But things have sped up! Good. I suppose I need to sand them then, and then varnish them some way or another, and then they're done. Then a plasterer can come and put plasterboard back - but only between the beams. I suppose it's good to have an extra layer between the floors! And it creates a space where the electricity cables and water pipes can go...
Posted by Margot at 09:01