The previous week, I had attended a historical talk with Chris; it was about the Great Orme Copper mine in the bronze age. And they drew attention there to similar talks; one would be the week after, about the Dinas Dinlle hill fort. That one was on a Thursday. We went there as well!

I have not been to Dinas Dinlle but I really should. And now I REALLY should! I knew about it because there are some cool thrust moraines exposed there. But now I also know something about the hill fort!

It was a talk by three different speakers; one set the scene, including the geology; one talked about the geophysics they had performed, and then one spoke mainly of the dating. She also mentioned palaeoenvironmental reconstruction work but that was unfortunately still in progress! So, no data on the vegetation and such. Too bad! But the place had been in use a long time ago, and played a role in the Mabinogion, and had later fallen into disuse. And in the early 20th Century it had been part of a golf course. Now it is protected! But archaeologists can do excavations, to a limited extent. They had been allowed to put two trenches near the cliff! And that cliff is a mixed blessing.

The fort is now right at the beach, and it's being actively eroded. That is the reason these moraines are exposed. When the fort was in use, it was quite some distance from the shore. Not anymore! And the erosion will slowly eat the fort, and that's why excavations were allowed. Better excavate before it is lost forever!

So what did they find? Mainly very big roundhouses with massive walls. The diameter of one of the houses was, I think, some 13 meters. That's a lot! With 2m thick walls. I hadn't seen that coming. The estimate was that some 100 (also reported as 30-200) people lived there at its peak.

I also couldn't resist buying a book about the maritime history of Wales! More will come from this... 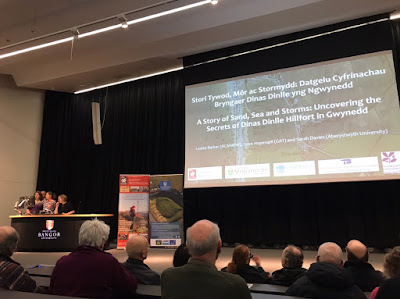