My third free Thursday Night I decided to stay in! One of the things I really wanted to do one day I had time was go through the archive that my house had come with. It's a big pile and I'd had a bit of a rummage but I wanted to do a more thorough job and document systematically what I'd find. And I wanted to incorporate what I had found in the county archive too. So on that free Thursday night I had a good start. I went through each document and I summarised its contents in a spreadsheet. I came across all sorts! I struggled with the interpretations; I don't speak legalese so I'll have to do another session in which I try to find out what phrases like 'whereas the property hereinafter described and intended to be hereby conveyed is vested in the Vendors in fee simple upon trust for sale subject to a Lease bla bla bla' really mean. It probably means 'the vendors lease out the property' but I'm not sure. If they are vendors, are they not selling? But there was mention of a yearly rent in that document, nothing about property ending up in different hands. Oh well. I have a lot to learn! But I can't be the only one. I'm sure there are websites for this sort of thing.

One thing I did find out: in 1898 the house was nr 14. That is good to know! And it fits (almost) with what I found in the archive! The oldest document in my archive, the one from 1898, suggests a chap called William Hugh Pritchard gets the lease. The building is owned by a bunch of clergy. And in the census I found the occupant in 1901: Hugh Pritchard. Is this really the same man? Quite possibly! Some people use their middle names, and I doubt a quarryman (which is what he was) at the time would have had a passport. So yes I could imagine him being called either William Hugh or just Hugh depending on circumstance. Although 'Hugh Bryn Afon' would be what he would actually be called then, according to regional tradition. Even though the name is barely rare here. Guess what my landlord was called when I lived in Menai Bridge. Yes indeed, Hugh Pritchard... 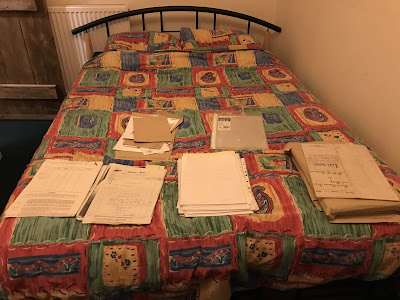