The painter was done! But was I really ready to put furniture in the spare room? No! I mean, he had sorted out the wallpaper issue, but I still thought there were details to sort out before I would consider the work done. For one, there was one corner where the wallpaper wasn't quite glued down OK. And he had caulked the joints but caulk can shrink a bit. And he had got some white paint on my dark hatch. And there was a strange joint in the wallpaper that also had shrunk and thus cracked. I wanted to sort all that out first! So I glued the corner of the wallpaper back. And caulked the joints where more caulk was needed, including that weird joint. A bit experimental; I have never caulked before! But if not now then when? And I caulked some edges where earlier on, window installers had caulked over wallpaper so when I removed said wallpaper, the ugly edges showed. And when I was at it anyway, I caulked an ugly edge from which I first removed some old paint from Rose's regime. I didn't take pics of 'before'; that is an omission! 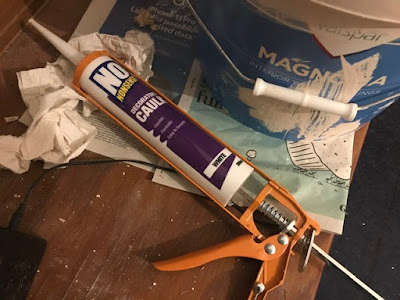 New tool in the tool kit 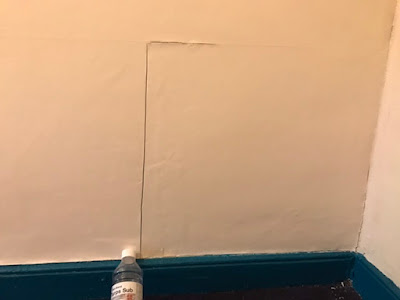 The strange joint in the wallpaper 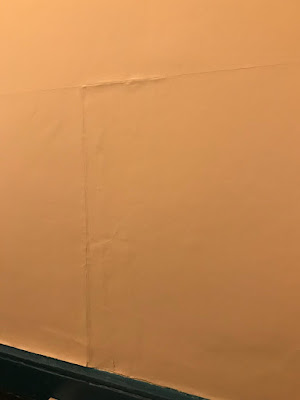 How I managed to make it look 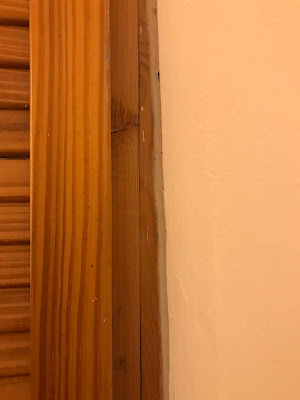 Where the caulk is now, there used to be a ragged gap!


When that was done I did other things. And then came back to paint over the caulk. It was probably dry now! I just hoped it wouldn't be too obvious this was a different generation of paint. I also started to touch up the greenish bits. But that was complicated! It turned out that when I had painted the woodwork, I had not stirred the paint thoroughly enough, so I had been painting with whatever pigments had been floating on top, and had left the rest for the painter. Oh dear. In this case, the dark bits were lowest in density! So my woodwork was painted considerably darker than the bits he did. Oh dear. Can't really touch up the dark bits with the light leftover pain! So I did some light hiding of the white paint and called it a day. 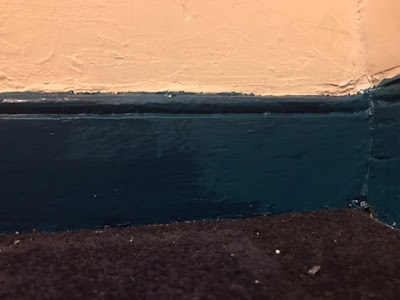 Where the dark paint meets the light paint


I suppose I now need to see if the covering jobs were satisfactorily done. And if so, I can finally really take the working platform out, have a hoover, and move furniture in! I suppose it is about time...
Posted by Margot at 08:39