My first non-ThursdayNighter night I spent in the pub! The second one was Boxing Day so didn’t count. And now this would be the actual second.

It would be easy to let the Thursday Night blend into the other nights! With probably late work, and then dinner, and then not much. But I didn’t want that. I wanted to make something out of them! And I decided that some of the fun is the walk to the entrance. I could do a night walk on my own! And see how my navigation skills would hold up.

I decided to walk to Moel y Ci, a pretty mountain beyond Mynydd Llandygai. So I put on my caving hat (I didn’t need a helmet, but I wanted the light, and these two are fixed together), grabbed the map, and set off. It was gusty!

I started on a path just off the bicycle path, something I have done before. And the river bank was gorgeous in the light of the rugby fields! It was too dark for my camera to document that though, and, regrettably, I didn't think of trying with my phone. I walked on. I was soon on new terrain. 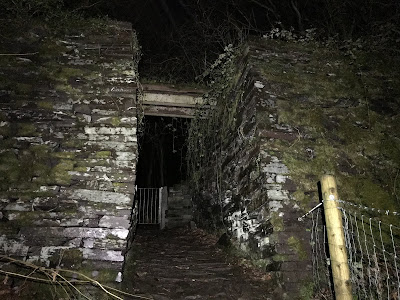 Where the path goes underneath the old quarry railway

I soon came across two horses in a very muddy field. They were surprised to see me! They seemed to want to say hello but didn't like my light. And the ground had been so churned by their hooves I was not keen to switch it off! I would probably fall on my face. 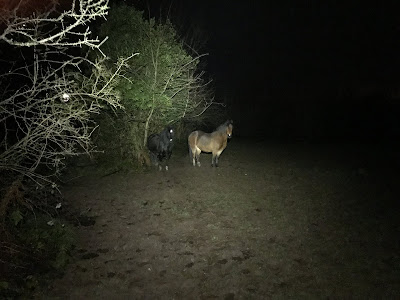 I then came to an abandoned farm. That was a bit spooky! A barn door was slamming in the wind. I knew I should have passed it on the right but I couldn't find where. I suppose the passage might have got overgrown! I ended up doing some bushwhacking, steam-crossing, and wall-jumping. And then I was on the route again!

I got closer to Moel y Ci. It's a hill that's bare on the southern flank and forested on the northern one. I see it every day but hadn't been on! Now I would be. I found a trail following the wall between bare and woods and followed it up. I was quite cloudy so I didn't get any lovely moonlit views but it was nice to be out there in wind and some rain. I walked down on the bare side. And from there I decided to go to the river Galedffrwd (where I have an alternative running route) and walk down that way. I always run up a tributary but the map suggests there is a path along the river all the way to the road to Mynydd Llandygai.

It's not really there! There are traces left of it, but blimey this was a case of serious bushwhacking. Oh well. Nothing wrong with some exploring. But I was still glad when I got to the tributary. From there it was plain sailing!

I think I should go back to Moel y Ci in daylight to appreciate it more! But this was a nice scamper. What would be in store next week?
Posted by Margot at 07:15