When I had been unceremoniously booted out of the ThursdayNighters I thought I should end on a high. So I suggested a farewell trip! I figured I may have two enemies and probably some indifferents but that should still leave me with a handful for a nice trip. And soon after sending the email I had my first participant! Kate (not Kate aka Bob; she would be away on fieldwork at the time). And Phil was up for it. And Chris. And then it was silent for a while. And then many days later Don mailed; he had been ill and hadn't responded before. He was up for it too! And we found a date for it. My plan had been a rather wet mine as I like it, but the water is chest deep, and I didn't want to do that to Don as he was recovering from a chest infection. And Don himself suggested a completely different mine, still wet but with 'only' crotch-deep water. Kate and Chris hadn't been yet so it was a fine idea! They hadn't done the other one either so we should do it some other day, but then without Don. That sounds uninviting but I'm thinking about his health.

On the actual day, Kate mailed early in the morning she was ill. A pity! And then, a lot closer to the time, Phil texted saying he was tired so wasn't coming either. This was going to be a rather small trip! Typical. But well, if one's ill one's ill. I'm sure we'll do another trip when Kate has recovered. Will Phil be interested? One way to find out. And we were still three! Still a valid trip.

When I got to the layby with Chris, Don was already there. We got kitted up! And Don had a wild idea; there is one pitch which involves a lot of water falling on your head. And he thought we may be able to divert that water. It can choose between two ways down and he wanted to make it choose the other one! So he had brought some cement. Maybe we could build a wall. All the rage, it seems!

I put the cement in my bag and we set off. We got in. Chris hadn't been and Don and me hadn't been for years so we had forgot bits! Don had misremembered the first pitch, but I still recognised it. And went up! And soon we were all below the very wet pitch. I ditched the bag and went up. Don then tied the bag to the rope and I pulled it up. And then Don and Chris came up too. We were all quite wet! 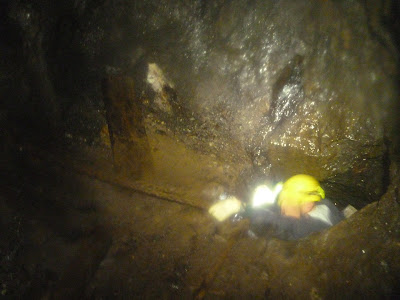 Hazy pic of Chris coming up a set of ladders

I had started building a bit of a dam with a beam and some rocks I found. And I tried to dig a bit of a gully to tempt the water the other way. Then the others joined in! We made a beautiful dam. Whether the cement will help I don't know; it doesn't really get the chance to dry! It might just get flushed away. But I am sure we made a bit of a difference, especially with our gullies. Whoever comes in here next might get less soaked! It might be a ThursdayNighter. Not sure they deserve my efforts to make them comfortable, but let's not be uncharitable. We decided to go on! 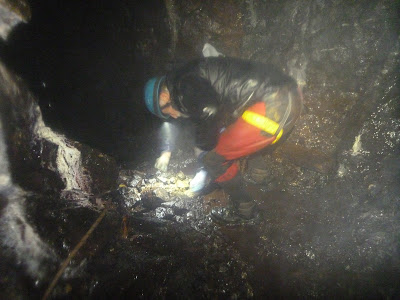 Trying to dig a gully

We did the next two pitches to the level with the adit. I wasn't sure we should also go further up (there are two more pitches) as Chris was a bit uncomfortable in the back. But he was up for it! So we went to the far end. And saw that a huge rock we had worried about years earlier had come down. But now it was blocking the passage! I have no desire to remove it from there, but it was nice to see it. And then we went back down. And out. A good trip!

We changed into dry clothes and then had some Hevva cake Chris had made. Nice! And then we went to the pub for a hot chocolate. It was a very small trip (Don commented on that that said a lot, and he was right) but actually, three is a good number in there. It had been fun! And we will do more of this. Don is up for more trips with us. And when we have a sizable contingent of Kates we're ready to roll bigtime stylee! 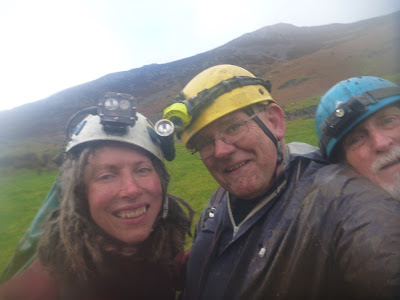