New year with both dissertation students and a master student

Last year I had three dissertation students. I'm not sure I said much about that! Three is a nice number to be honest; you get only a limited number of timetabled tutorial slots, and with three students you just divide these up in three 20 min slots and Bob's your uncle. This year I was supposed to have seven! But one was scavenged by a colleague. This student was imprecise but enterprising; she had accidentally given a physical topic as one of her preferences, while she was a biologist. And I had allocated her to me on that topic. It was her first choice! That is; it was listed as her first choice. But it wasn't, really. And before I had managed to sort out something she had found herself a biologist who was willing to take her on. Good for her! So I was left with six. And that means I have to be a bit more inventive with the timetabling; doing ten minute slots is a bit sparse.

But that's the logistics; what about the science? I have a students on a wide range of topics; geoengineering, sea level change, carbon capture and storage, GHG emissions from waste plastic, and the Gulf Stream. Cool! And when I had the first tutorial they all showed up. A good sign! So I'm looking forward to this. I hope they are too! I do think I managed to steer a few away from taking way too much on. I hope they all do well!

And then as well, the MSc students were allocated. Last year I had one. And I found out I had one again! On a project, again with our industrial partner! It will be cool as well. We will be looking into the effect of the drainage of a local copper mine on the estuarine fauna. Forams and mines combined; could it be better? Stay tuned for more! 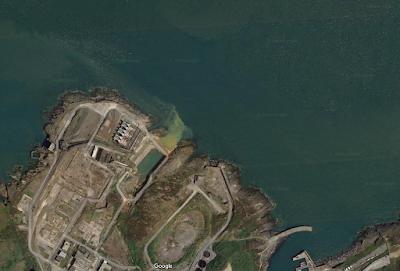 Screenshot from Google Maps: notice the red plume of mine waste in the sea