When I bought the house, the roof of the garage leaked like a leaky thing! It wasn't the roof itself, but the roof has some skylights, in perspex, and that gets brittle with age. One window (two small panes) had broken and let the rain in like nothing on Earth. And Rose had left lots of stuff in the garage, so there initially wasn't an awful lot of space to put things, and you don't want to put things in a leaky spot. It would be best to not only empty the garage but also repair the window!

The next thing to do would be to have the windows replaced altogether. Or actually, to have a lot of the roof replaced. Leaky windows lead to rotten beams! But my priorities for now are to sort the house out, not the garage, so I decided on a temporary fix. I bought a piece of new perspex and intended to fix it to the inside or the window pane. Not ideal I know; that way the water will gather in the window pane, and rot the wood. But I'm not ready to go onto an old slate roof to repair it from the outside! And not to pay someone else to do it either. Yet. So I thought I'd screw the perspex to the inside, and file a gully in the wood, and insert a piece of hosepipe into the gully. The hosepipe would hopefully drain the window pane!

I found a dry Saturday to do it and it worked out as I had planned. Now I have to wait for the rain to come back (when I'm at home) and then I can see if my construction sort of works! 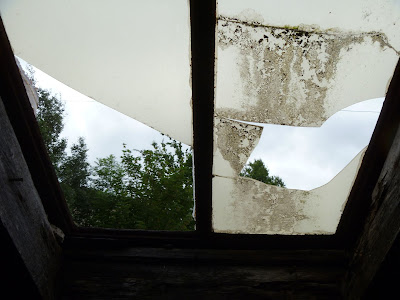 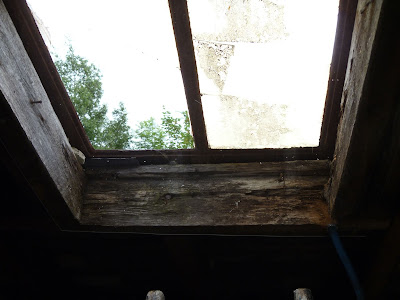 Fixed! Although the perspex is so clear it's hard to see on a picture 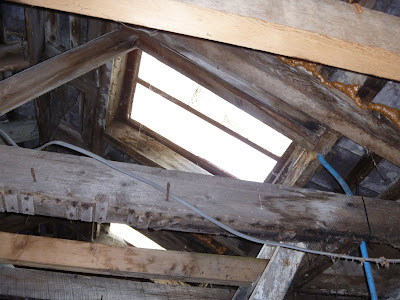 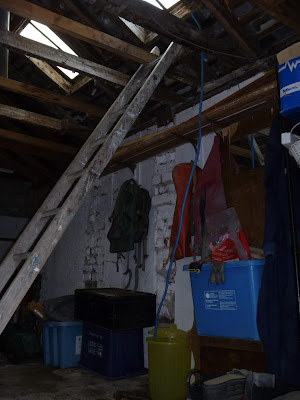 With drainage system
Posted by Margot at 06:57