It only took me a year to get my Welsh GCSE. The next step is an A level. But that took four years! Not because the step was so big, but because the A level exams were always at the same time as our June fieldwork. And they're only once a year! But this year the date of the fieldwork was changed to September, so finally I was free to actually attempt the exam. So I did!

I had to submit some files beforehand: two recorded conversations, and one text about myself. But now the main part would take place. The written part on Wednesday, and the oral part on Thursday.

On that Wednesday I walked into the building where the last time the exams (or at least one of them) had taken place. But nothing suggested any relevance to the exam! I walked back into the building where we have classes; this one doesn't have exam halls. But then it dawned on me we wouldn't need one. Not many people progress to A level! And near the entrance I saw a sign saying I should go to room 'Hirael'. I found two more candidates there. We had a bit of a chat until the invigilator came to get us. We would do the exam in the room next door. And only seven tables were standing ready for us! I knew one candidate had had to pull out due to a concussion, so we should have been eight. And only one was a male. Still strange, that gendered aspect of learning a language. 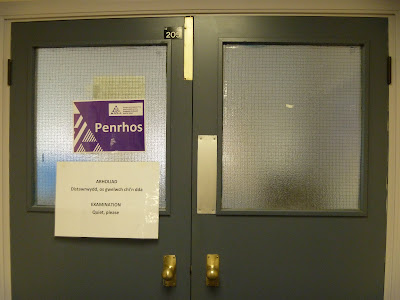 We started with an exercise where you have to reword sentences (using idiom), and have to fill gaps in sentences. If you know what the answer is it's easy. If you don't know, it's hard to guess! I did the exercise in just over 20 minutes, and handed my paper in so I could go outside and have a coffee. We wouldn't start on the next bit in over half an hour! But the invigilator, Sharon, looked shocked. She couldn't believe I was really done. She thought I was giving up and going away! I reassured her and walked out.

The second part was writing: we were given two sets of two options of a topic for a type of text. I chose to write one letter in which I nominated someone to be considered to be celebrated in a fictional TV programme, and an article in the local newspaper about a fictional protest that had taken place. We had to write between 190 and 210 words. I spent a lot of time writing a draft and counting words. That was a pity! I only just managed to finish within the given hour and a half. No time to look over it! Oh well. I hope it went well.

When this was done we had a one hour lunch break. And then we had the last task: listening. We were played two radio fragments twice, and had to answer questions about it. I figured it went well! I couldn't answer what someone's dad's job was as I didn't know (and thus not recognised) the Welsh word for 'accountant' but that was pretty much all I knew had been wrong. And at the end of it we could go. Day one done!

The next day I was back at 8.30. A few minutes later I was given the instructions sheet. It contained one text I had to read and then answer questions about, two statements of which I had to pick one to discuss, and two topics I could choose from to discuss in relation to myself. I was allowed to use a dictionary to look up things I thought I might want to say about them.

Then Sharon came to get me. She introduced me to a bloke I didn't know; they try to have you talk to a stranger. This man was quite friendly. And it soon became clear we were on the same wavelength. He agreed with me in the statement section. I think we could have talked for a while longer. But at some point he said we were done. And that I had done really well!

Now all I have to do is wait up to 8 weeks to get my results But I have faith! And then that's sort of it in this succession of exams! But there are always more qualifications to get...
Posted by Margot at 06:59