Soon I'll be on a proper mountain hike. I figured that should mean I now spend my weekends doing chores and work and such! I will have all the wintery fun in the world soon, and the pressures of work are high as always. I was late-ish in the office on a Friday, preparing for an upcoming meeting, and looking forward to a weekend of household chores, Welsh homework, and hike preparation. But then I received an email. Whether anyone was interested in walking up y Garn the next day? It was sent by one of the chaps from the climbing club. Going up y Garn in the snow! With nice chaps! It sounded too spiffing to ignore. I mailed back I was game.

The next morning I packed my bag and set off. Soon I was at Ogwen Cottage. It was windy! More so than I had expected. This was going to get fun. Soon Eifion and Simon, my companions, arrived too. They also noticed the bracing conditions. But we won't be discouraged by that!

We walked up to Llyn Idwal. We were in the shelter of the valley. It was a nice walk! When we got higher up the path got icy. Time to put on our crampons! It was the first outing for mine. I had bought them last year after a slightly iffy winter walk, but winter was fading out by then, and they had not seen use. I hoped they'd perform well! Llyn Idwal from above 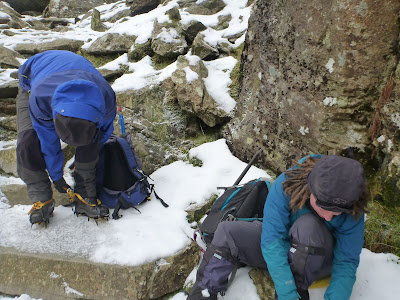 Putting on crampons. Pic by Eifion

We scampered up the icy track to the pass. It was properly snowy there! It was lovely. What was less lovely was that my crampons were slipping. I admit I hadn't bought the most advanced pair, and now I felt the disadvantage: they only had a little pin to keep your heel from slipping out, and it wasn't enough. I slipped right over. Oh dear! After a few attempts to sort that out Simon suggested I just take them off. We were on the ridge, anyway. I did.

We walked on. The view was getting grim! The valley we had come from looked threatening, and the snow was whipped up over the edge. But it wasn't so bad we turned back. We got to the top! There we had a quick drink and snack. The views were spiffing! But we didn't linger; there wasn't an awful lot of shelter. And the men had only paid for four hours of parking... 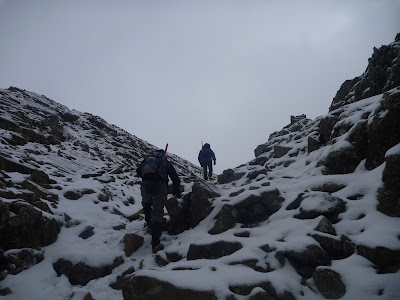 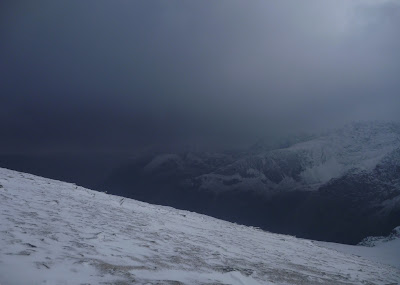 The view was grim 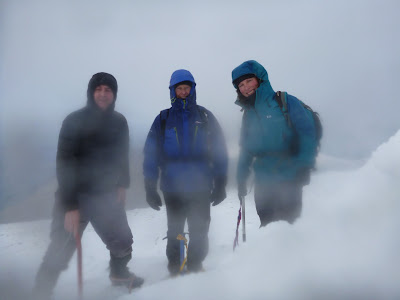 At the top! Pic by Eifion 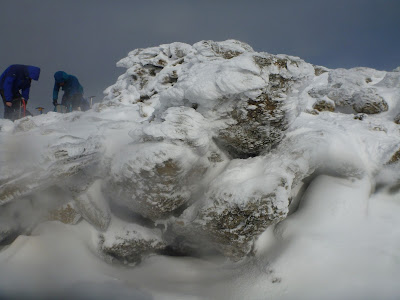 Packing up again, next to the frosty cairn. Pic by Eifion

When we got down we got to the trickiest bit. We wanted to drop down from the main ridge onto a perpendicular ridge that would lead us back to Cwm Idwal. But the ridge was snowy, and the wind was so strong it was sometimes hard to stay upright. And in order to step off the ridge you had to brave the blast of ice being blown over the edge. I had not brought my skiing goggles! I could hardly keep my eyes open, and I was stepping off a ridge without crampons. Oh well. What could possibly go wrong? Nothing did. And the wind didn't stay that bad. After the first bit it was actually quite a relaxed walk down. Good! 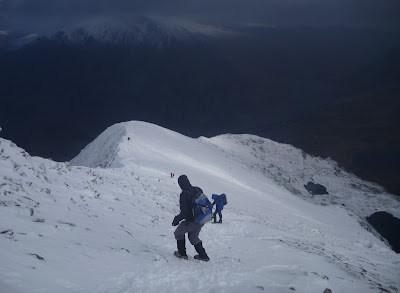 Descending into the darkness 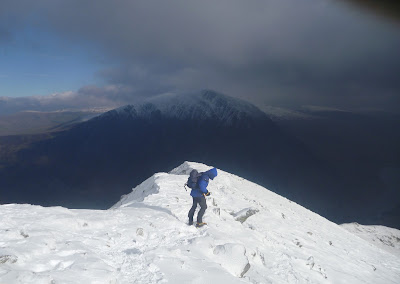 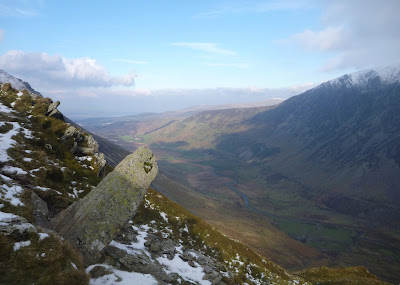 The landscape gets friendly

As by now the sun sometimes broke through the clouds, the views were amazing. I had a blast! In no time we were below the snowline, and all the crampons came off. We were back in a bit more than four hours; the men had got away with it, and even though we'd done a considerable mountain, we were back at 2PM. I know I may not have long in Wales, and this really was an opportunity to not miss!
Posted by Margot at 09:15

That looks like quite a climb, but totally worth it for the view! I don't think I could do what you all do, so thanks for sharing all of your experiences here!