Newly inspired in the garden

When I had my mother on the phone before she would visit me she warned me I should have enough to do in the garden for her visit. I told her not to worry! There really is a lot to do. But I made sure not to go weeding just before she came. And when she came, she weeded like the clappers. And we planted new plants. And she advised me on other changes. And when she left, I was still extra motivated to do things with the garden.

I had several plans. One was to find plants for the raised bed next to the river. One was to make a small bed in which I had planted only two types of plant a bit more interesting. And I wanted to prune a rose bush underneath the crab apple tree. And I wanted to dig out almost the entire bed that used to have another rose bush (and poppies) in. And I wanted to get rid of a big pile of soil under plastic that had been colonised by ferns. And I wanted to do a bit of adding and reconfiguring to the central raised bed. And I had already done some on the day my mother left (it was a bank holiday): I had tentatively started on the pile with the ferns but it was difficult and hard work. And I had pruned back the rose bush in the same way as the other one: pruning until I figured it should go altogether. It was entwined with a holly tree and I figured that should go too: it was standing underneath the crab apple tree so could never properly grow up.

In the next weekend I continued my efforts. I went to the garden centre and bought more plants. And then I set to work! I moved two plants from the boring bed to the central bed, and put a contrasting plant in its place. I attacked the rose and the holly. It was hard work but I got rid of them! Then I picked a different bush to replace it. And I added some lady's mantle my mother had found. The shrub could grow biggish and the lady's mantle could cover the ground. I shuffled stuff around in the central bed. Then I also managed to get rid of the first two clumps of fern. Still quite a lot to go! And I stuffed everything I had removed in the designated bin. Success! The garden is looking better every time. There still is a lot more to do; I still have entire beds I haven't started on but I don't want to overdo it. One at a time! I now already have five beds that either only have in them what I put there, or are dominated by what I put there, and that's good going in my book. Let's now see if all my plants like where they are. And then the next step is continuing on the bed that had the rose bush and now only has poppies, and the fern clump! 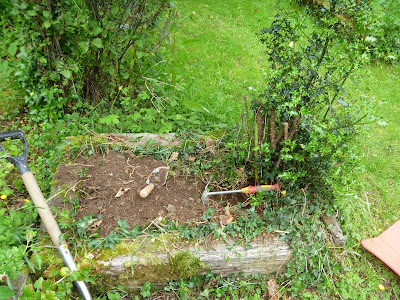 The reduced-to-stumps rose and the holly, before they were uprooted 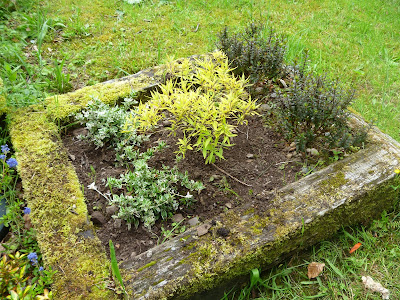 The dull bed, now less dull with a new plant in the middle! 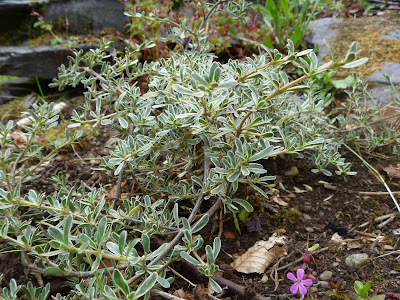 A plant that now adorns the riverside bed 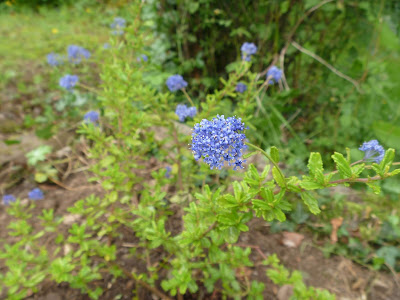 The shrub now occupying the bed vacated by rose and holly 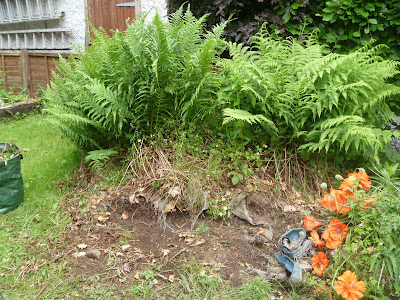 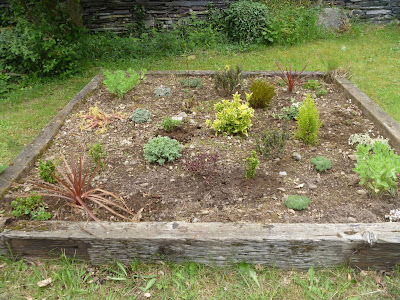 The central bed; now still on the dull side but I hope it will all grow together, like the succulents bed has already done 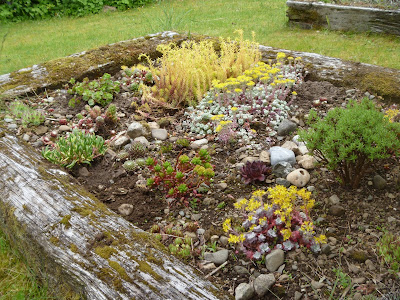 Said succulents bed, a lot more inhabited now than it was at the start (and I've even removed clumps of the fast-growing species)