I walked into a house I owned for the first time. It was exciting, but also a bit disappointing! Rose had left stuff in pretty much all the rooms. And it didn't look very clean either. And I would have to unload; I had stuffed my car full of the first round of kit. I had taken all back seats out so there was a lot of room. Lots to unpack! I would have so much to do! But where to start!

I opened the garage and was in for another surprise. It was a tip! Oh dear. So much for being able to store anything there. Hm! So where to start? I started everywhere. I started collecting all left-over gunk from the house, and place it in the garage. I had texted Rose with my thoughts on the garage, and she reminded me she would have a tradesman empty it and pay the bill. A relief! And he could take the house left-overs too. I also started unloading, and I hovered the top floor, and I pondered which room I would make my bedroom. I also took some cleaning implements from the kitchen (some of the stuff Rose had left was quite useful) and started cleaning. 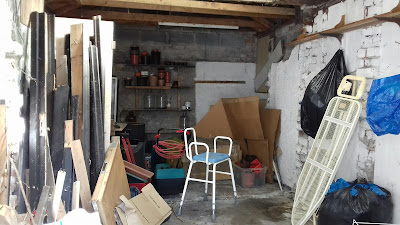 The garage as I found it

After a while I had two hoovered rooms upstairs, and a bed (left by Rose with my consent) on its side, stuck in the room I didn't want it to be in, but where it would stay until I would bring allen keys. These rooms in the end were (almost) empty of everything that shouldn't be in there. I had put the mattress in its destination room, and some deconstructed furniture too. I would build that back up later. 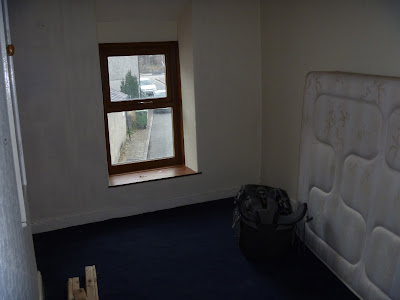 I had unloaded my car, and uploaded some unused boxes Rose had left. My own boxes were all a bit manky as they had been kept in the garage. Hers were immaculate! And some of the stuff I kept; for some reason, she had left a machete. And a pile of pre-metric coins. And a workmate. And ladders! And binoculars. It's a strange collection.

I tried to put a comfortable chair in the living room, but it wouldn't come through the door. Oh dear! That would be the same thing with my sofa, certainly. I wold have to buy a smaller one! Oh well, that is easily done. I had been directed to a company that restores furniture employing people with disabilities; they had sofas. I was sure they would have small ones too! The chair went into the cleaned and emptied conservatory, with the side tables. 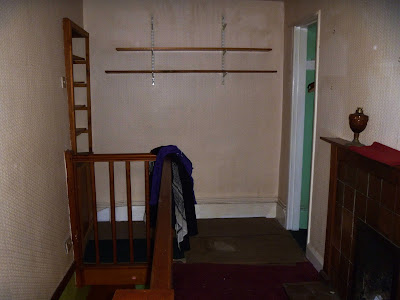 The landing; empty now, and ready for the builder, joiner, and painter/decorator 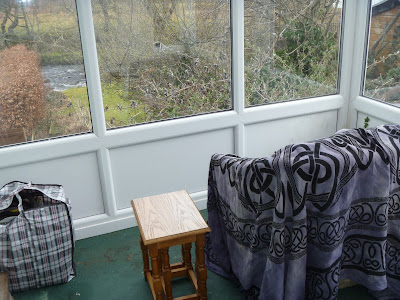 Chair with view on river! And the bag on the left contains a wallpaper stripper.


I also moved the freezer; it seemed not to be in a practical space. I shoved it aside, and a horrible black patch appeared from underneath it on the floor. Oh dear! The cleaning implements around would struggle with that. I also emptied out the master bedroom, and the landing. By then time was sort of up!

I would go digging that night; there was a whole Easter long weekend to work on the house. So I left, drove home, and on my way to the dig, dropped off a chest of drawers. The next day my work would continue! And it will continue for months, if not years...