The first time we went climbing outdoors this year we did, as is tradition, a very easy rock. But with that ritual over, we could start for real! This time we would do Castle Inn Quarry. And that's a lot better.

We gathered at Parc Menai, and with 5 of us we squeezed into Eifion's car. On we went! And on Anglesey, it had clouded over, but the quarry was all sunny. I grabbed some ropes and went to the wall I thought we'd climb. I come to climb! Not to stand around on a parking lot and chat. And in no time I had my kit on and was ready to roll. Someone suggested I go with Eirian to a further wall. Fine! We found a route. Let's have it!

Eirian wasn't so sure. What grade was that route? Where was the guide book? I didn't care, it looked feasible. In the end I managed to convince her to just let me have a go. And I brought the rope up! And while she was trying to follow, Janet lead the climb to the left of us. A third route even further left was being done by some unrelated people. 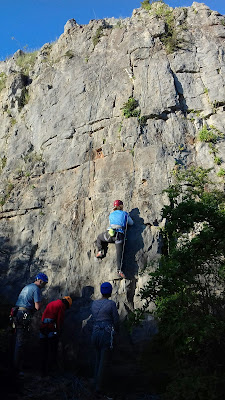 Eirian on the route Janet had lead

The unrelated people left. That meant there was another route available! I said I might want to lead it. Eifion, who had seen it be climbed from quite close up, said there was a difficult bit in the middle. Hm! But the top of the route was quite close to that of the one Janet had just lead. So I suggested I climb that route while carrying a rope up. Once at the top I'd try to shimmy across and put the rope in the anchors! Hey presto, new route. Janet and Eifion were ehm-ing and ah-ing. I thought 'screw that' and got ready to get a rope, when Eirian said she went to go have a look at the others. Could she bring a rope? She didn't. I left the ehm-ing, ran across, got me a rope, and got Eifion to belay me. Finally! Action!

The climb wasn't all too hard. I got to the top with the end of a second rope clipped into my harness. Now I had to get across! Knowing I would swing out considerably if I would fall. I slowly inched closer! And then I could clip the karabiner I had the rope on onto an anchor. Then I clipped the rope through the two karabiners. But how to get the end back down with me? Best, I suppose, to re-clip the karabiner, but by then I wasn't thinking all too straight and I left the karabiner in position, held on to the loop that I had pulled through, and managed in the end to clip that to my cowstails. It would have to do! I shimmied back to the top of my own route and came down. The rope was long enough for this up-down-up configuration! And then Eifion went up and tidied the rigging up. He said the route was easier than the one next to it! I could have probably just lead it. Oh well.

Then everyone had climbed everything they wanted. We could unrig! It wasn't awfully late. And I had only climbed three routes, but with the funny bring-a-rope-up antics I felt like I had done something anyway. The season is properly open now!
Posted by Margot at 07:33