Monique would come to admire my house! I looked forward to that. I knew that when I would reach the Easter break I would get some space to breathe. And she came a few days later. I picked her up from the station and took her home. First I showed her the house! Of course. She liked it. And then I needed to fill her up with tea and food. She had been travelling since the morning! And we had a lot of catching up to do. After food and buckets of tea and lots of words it was bedtime!

The next day we first had to pop to the farmshop as I was running low on bread. And while we were at it, we walked past the local dragon too. It was a wood carving that had appeared a few months earlier. I had only seen it from the car! 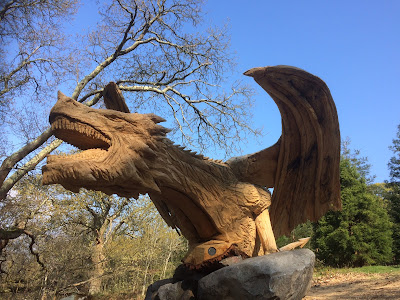 I also had to pop by in Bangor. One of my old York friends, Louise, was now at Gloucester university, and on a fieldwork with the students in the area. They had settled down in town for lunch and we would join them! It was great to see her. And I hope she'll come visit! And I should visit her!

When we went home we set out to build my garden shed. I had figured this may be the time! It's fun if you do it together. And Monique was up for it! So we lugged all the components to the garden, and some tools, and set to work. Together we did well! We followed the instructions and rather fast, a structure appeared. Some of it was a right faff. I started screwing two panels together and didn't do well. You had to be close to the side, which means you have no space for either the drill or your hand. And it's hard to apply force. I lost the skin on my knuckle! But I got the screw out again and tried under a better angle. That worked. No more skin was lost.

Using the drill helped, but quite soon it wouldn't rotate in reverse. And then it didn't want to go forward either! My trusted drill! I bought that from my first wage. And it was supposed to last me forever! But we were lucky; the neighbour leaned out of the window to see what the commotion was, and offered to lend us his drill. That helped!

Slowly the structure got four walls and a roof. But time flew by! And I wanted to have time to sit in the garden and have a drink. Monique agreed. So we left the shed with the roof only mildly fixed, and without roof felt. I could finish that on my own!

As before, after dinner there was only time for nattering and drinking tea. Then it was bedtime! Monique gets up very early normally so even with the one hour time difference she got tired before me, and got up at approximately the same time.

The day after would be the most beautiful, so we would go for a walk then; that requires a blogpost of its own! 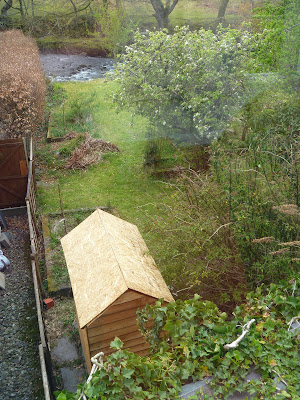 The almost-finished shed!
Posted by Margot at 08:46