We still get to see new mines! There are so many here. I wasn't digging this week as Miles was away, so I got to see this new place. It wasn't new to Jason; the first time he showed up David immediately found out he knew about Seler Ddu; this turned out to be a mine he had been interested in for a while, but had never vistited. With Jason as our guide we could now change that! And Jason had explored the dry bits exhaustively, but never the wet bits. It was time to change that!

David, Simon and me gathered in Clynnog Fawr. We piled into my car and drove up a small lane. We just had enough space to park behind Jason's van! Time to get kitted.

We all decided to walk up in less than full underground kit as it was a warm evening. And the views were nice! It was a nice stroll up the hills. We went all the way to the far end and first explored the largest accessible bit. It was a very charming warren! And entirely dug by hand; the pick-axe marks were still all around. What a work! It must be an old place. David photographed it to within an inch of his life! Afterwards he would vanish to his mother's place for a week, which stopped him from uploading them, but one can be patient. 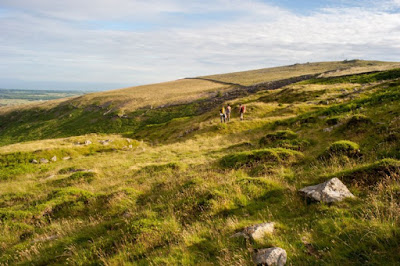 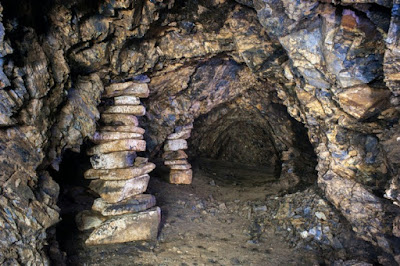 Some of the mine had lots of side passages and strange stone supports. Pic by David 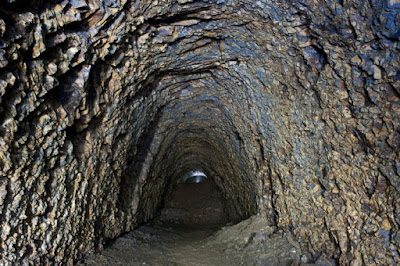 Some of the mine comprised simple straight featureless tunnels. Pic by David 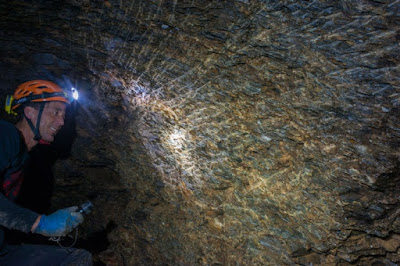 We then went to the first wet adit. Only Jason and I had actually brought our wetsuits; David and Simon had conveniently left them in their cars. We walked in! It didn't go above waist deep. The adit was just a straight tunnel. No side tunnels, no chambers, nothing. Oh well!

We then went to the next bit; that had two levels. The top was dry but the bottom level was wet, so again Jason and I set off. This water went deeper quickly! And as soon as we stepped in we could hear the menacing thudding of the waves we had made slapping into the ceiling. Thta told me we wouldn't get far! Jason went in up to the neck, but as I knew it got flooded to the ceiling anyway, I decided to keep things comfortable and keep my bra dry.

We came out! David tried to drain the level from the outside but was only moderately successful. Time to go down! And then away quickly; the midges had descended. Nice to have seen this! And if we ever need another dig: there is enough here to keep us busy for a while... 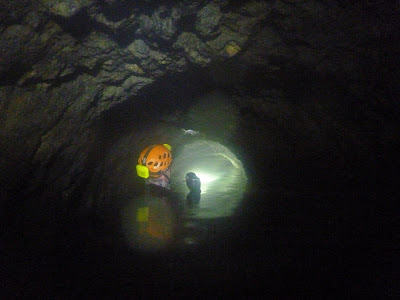 Jason neck-deep in cold water
Posted by Margot at 10:08