I had been looking forward to this! I had been making do with my old iPhone 5 since early spring, because I really couldn't get along with my Samsung. But a phone that actually did what I wanted to would be nicer! And finally that day came. I was up for an upgrade on a Friday; I had a tutorial until 5pm. And the phone shop is open until 5:30! So I scampered up. The man behind the counter remembered me from an earlier visit (it hadn't been him who had talked me into the Samsung so it must have been from when I bought the iPhone 5!) and said we could do this in 20 minutes. I said I wanted an iPhone again! They are quite robust. And we quickly settled on a 7. And we sorted it quickly! And pleasantly. It was only about five minutes after closing time when I left. With my new phone! 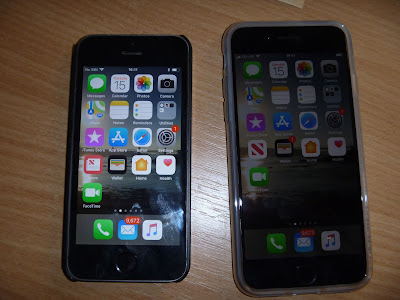 So did I take it into use immediately? Well no. I had other things on my mind. So I sorted it on a Tuesday morning when I was working at home because I had a lecture at 11 or so. No use first biking to Menai Bridge! So I switched it on and let it sort itself via iCloud. And switched over the sim card. Almost sorted!

Everything worked! Except my work mail. I decided to ask our helpdesk. I popped to them after a lecture. They didn't know how to sort it either! But then I noticed I had two mail icons. The outlook one was refusing to play ball but I managed to make the other one work. Good enough! So now I have a phone that does what I want, and as I was already used to iPhones I found it totally intuitive to work this specimen. Success! And now I can take my apps off my old phone, plonk it full of music, and use it as a stereo thingy. Look at me, I'm with the times!
Posted by Margot at 08:55