History of the house

After the important stuff had been done my solicitor asked me to pop by her office to retrieve some paperwork. I wasn't sure what kind of paperwork! But I popped by. It was quite a pile! But with all the moving house stuff under way I didn't have much time to have a look at it. One evening I had a quick look. It was a pile of old title plans and purchase documents and whatnot! Very cool! In 1961 the house had been worth forty pounds. And I even had a document stating it had sold for only ten. And I could trace the history of the place through time. It had changed house number from 14 to 13. Originally, there had been houses on the other side of the street too (where the parking lot is now), and even on the river bank, where they now is only my garden, and the neighbour's garden. My garden had been a slate yard! The neighbour had already mentioned something along these lines, but now I had it in print. And the garden belonging to the house had originally run parallel to the river. Clearly, some of the land had been changing hands! 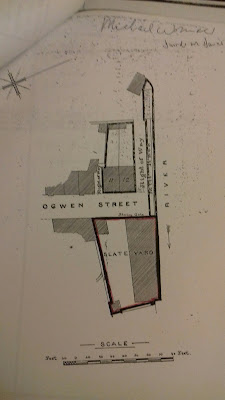 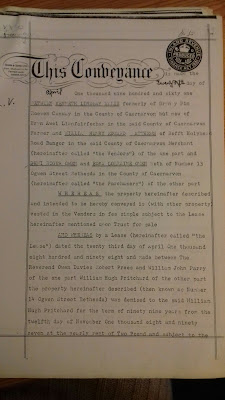 With that knowledge I also looked at some old online maps. The house has at least been there since the very end of the 19th Century. I hope to find out more details when I at some point go through the documents in greater detail! And I hope to find out if indeed it had been a pub. And when. I like that you get the history of the house when you buy it! It's a little treasure trove. Stay tuned for more interesting findings!
Posted by Margot at 11:09