I read another classic! And this one was only published in the eighties, so it wasn't a Jane Austen-like classic with an overdose of oppressed women. I enjoyed it!

I had, years ago, read "Love in the time of Cholera", also by Gabriel Garcia Marquez, and I had loved that. It was a very calm book in which a timeline that in many books will only take a few months took decades. And with a title like above I figured this next book would be more like that. Nothing could be further from the truth! I started twice; the first time around I got so lost in all the characters and goings-on I had to go back and jog my memory. There were too many characters in it, too many battles, too many love affairs, too many deaths, and I couldn't keep up. But the book reads fast so it was OK to have to do part of it twice. 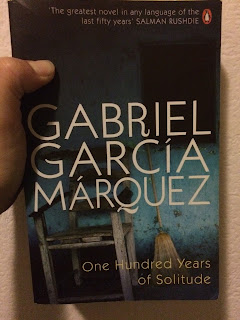 The story deals with seven generations of one family; one of the founding families of the (metaphoric) town Macondo. It is not set in a reality that's easy to pin down, but it seems to run from somewhere in the 19th Century to somewhere early in the 20th. I liked the magic realism in it; there is, in my opinion, nothing wrong with a prophesy here or a ghost there or someone living for 145 years, as long as it is narrated well. And it is. Do I believe in destiny? Well, no. But it is interesting to read a story by someone who seems to quite decidedly do. Break the filter bubble, start with yourself!

Not having read it in the original language and not knowing much at all about Colombia, I must have missed a lot of the context and cultural references, but it didn't hinder me. So I'd recommend this book to anyone who doesn't mind a narrative in which a confusing number of people carry the same name (such as twenty people called Aureliano, and then in addition an Aureliano Jose and an Aureliano Segundo), in which a lot happens, and in which not all laws of physics are obeyed. And me? I now started a book about Dutch expats. After that I think I'll try fiction again!