I don’t make much time to read. And I tend to have a Welsh book on the go. But sometimes I want to read something different. And some time ago, I bought ‘the silence of the girls’. For those who haven’t heard of it: it’s pretty much the Iliad, but told though Briseis, a Trojan woman who is captured and enslaved by the Greeks.

I read the Iliad in primary school (yes I was a swotty kid). I can’t say I remember an awful lot of it! I suppose maybe I could have re-read that first, but I didn’t. Maybe I will now! It would be interesting to compare the two versions.

I thought it was a great book! The main character is painted really well. And so is Achilles, the only other character whose thoughts are shared. And I thought there was a good balance between the mundane daily life in the Greek camp and the explicit presence of the Gods.

I had brought it to the Netherlands to have something to read, even though I was almost three quarters in already. But I found my mum about as far through the Handmaid’s tale. We decided to finish the respective books and swap! We’ll see. If she doesn’t like it I might just take it back the next time and read it again! 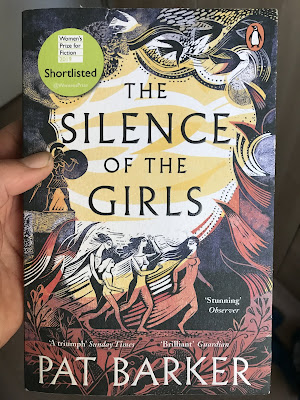