The Thursdaynighters don't stop for summer, but things can get a bit quiet anyway! In summer, Mick, Paul and David tend to scoot off to be crew on their annual Fairport Convention festival; that reduces the ranks a bit. And this week, Phil was on holiday, Edwyn had a 'do', and Ed had hurt his wrist. It would be a small trip!

When I got to the meeting place I saw Jason's van. He was early! It was good to see him again. Together we waited a bit; Kate might show up, and maybe some unannounced people like Don. But nobody appeared! So it would just be us. We changed and walked up. It was a nice evening, albeit a bit foggy! We would check out a shaft the others had found earlier and of which they wondered where it went. We took a slightly unusual route to the entrance, through thick vegetation, so we got rather wet, but we got there. Soon we were standing at the top of the shaft! I went down on all fours and peered down. I saw daylight! The thing must come out in a big pit. Dull! So where to go next? We decided Jason would show me some of the other parts of the mine they had recently discovered while I was digging. And so he did! I saw lovely chains, ladders, chain ladders, a ridiculously long jumper, snug cabans, and whatnot.And a lovely side entrance of the mine, looking all mysterious in the fog. 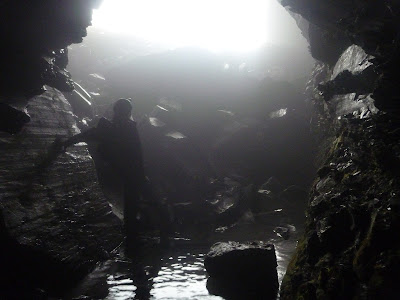 We sat down to have a sarnie. And we had a good chat! That tends not to happen too much underground; too many people. But now with only two of us the situation was quite suitable!We talked so much we decided to head out as soon as we were done talking. But along the way we did have a look into a drilled passage, and some unknown inclined shaft. Then we went back to the cars. I'm glad I had come! It would have been boring for Jason if it would only have been him, and we would both have missed the chat. And it had been close; there were issues with my car, and the garage had wanted to keep it overnight. But I managed to convince them to give it back so I could bring it back again early the next morning. A good call!
Posted by Margot at 07:19