This year I hadn't been so sure if I wanted to attend the dinner! I am not keen on the sort of food you typically get this time of year. And this restaurant isn’t famous for its vegetarian options. And I don't like eating that late. But I figured I should show my good intentions. And as well, the dinner always hosts several significant others I don’t see very often. Or pretty much not at all!

We would go to the pub first. Not the noisy student-frequented pubs this time, but a much quieter pub down by the pier: the Tap & Spile. We had sought solace there before! I was the first to get there. I sat down with a pint and my newspaper until the others arrived.

Slowly the others appeared. In spite of the awful awful election results that had come out that day we had a nice catch-up. And I got to meet new significant others And then it was time to go to the restaurant; Teras, in the same building the graduation earlier that day had been in. And there we sat down. I was sitting on a corner, surrounded by Miles, Simon and Briony; it's always good to see Miles, Briony hasn't come with us for years, and Simon doesn't appear very often either. It was nice to catch up! I sometimes hear the latest gossip about their house (they are doing a lot of work on it) via Phil but it's nice to hear it from the horse's mouth for a change.

Phil went around wearing a 'Bah humbug' hat and with a bag of presents. I got a puzzle loo roll! That will keep me busy. Simon and Briony got a frog game and a snowmankini (yes really). Miles got a book with management bollocks. That was such a lucky pick! He actually is a manager in a way.

After the dessert I popped to the other side of the table to socialise there too for a bit. And then I joined a small group of women discussion doing houses up. I was clearly the one who had done/was doing the least amount of work but still! And I made a plan with Briony that I'll pop by and see what they are getting up to, house-wise. I look forward to it! Simon handed out calendars and then it was time to go. And I was home at about 23:15, and I had had three alcoholic beverages. A wild night! By my standards. And it will have a follow-up! 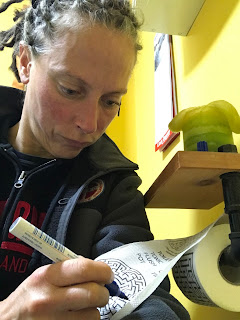 Me and my puzzle loo roll
Posted by Margot at 09:06