In early June, I had noticed the flat roof of the extension had been leaking slightly. But life got in the way and I didn't do anything about it. But now I was hoping I could convince the plasterer to come and lose up all the holes in the ceiling again, it was time to have someone look at that. So I rummaged around again in the list of contacts Phil had given me and found a roofer (also called Phil). And he agreed to come over the very same day! 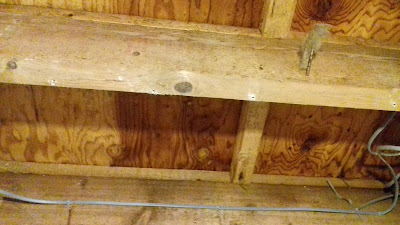 The dark stuff is damp

Phil had mentioned I had met this bloke, but that information had escaped me again. So when he showed up and recognised me it all came back to me! We had been dressed all Victorian in a steam train and a mine. Good times! But now we didn't have time to reminisce as light was fading. He had to get onto the roof quick! I first showed him the indications of leaking on the inside. Then I knocked on the neighbour's door. He provided ladders again! As usual. And in a jiffy Phil the Roofer was on the roof. I fetched my caving helmet (as it has a very good light) and then joined him.

Phil had a good look and prod. And then he gave his judgement. He wasn't too worried! The material of the ceiling was the sort of stuff that can stand a bit of damp. And the leakage, he agreed, was minor. He figured I just needed to pressure-wash the wall of the house above the flat roof and give it a good new coat of paint. That should stop the ingress! It probably just seeped through cracks in the paint down to the edge of the flat roof. And some paint would stop that. I could do that myself!

Phil the Roofer even offered to lend me his pressure washer. It would be interesting to connect it to water as I have no outdoor tap. But I had indoor taps! I'm sure it can be sorted. But I may leave it until later. I should have someone else do it, anyway. It's hard to maintain  a healthy body and mind with the work pressure I've been under since the start of the academic year! I need my weekends for doing work I can't manage to finish during the week, and if not that, I need them to recover. I can afford to have other people do stuff for me; I should do that! But I'm glad this shouldn't be much work. Just paint over the cracks, literally, and that roof is ready for the next 40 years...
Posted by Margot at 09:21