I was scampering through the university on the eve of the new term when I got a text message from the electrician. He had moved the house from the old system to the new one. Great! When I got home I saw that the old wiring had been removed. And I tried the new light switches! It worked! It was great. There were some blips; on Saturday I checked everything and sent a list to Mark of things I thought weren't quite sorted yet. But the bulk of the work is clearly done! And that means it's ready for the plumber (who doesn't have time yet, but hopefully soon will). And then the plasterer!

I also plonked some old lampshades I had inherited from Rose back on the bare bulbs. And I installed a new shade in the kitchen! It had come with an industrial striplight which I wasn't keen on. Mark had removed it! And that had resulted in an ugly scar on the ceiling but I will get to that. Putting the new shade there made me feel good! It does make a difference. I will go and buy one for the storage space too; that had a striplight as well! But not anymore. The other lamps can wait for a bit. 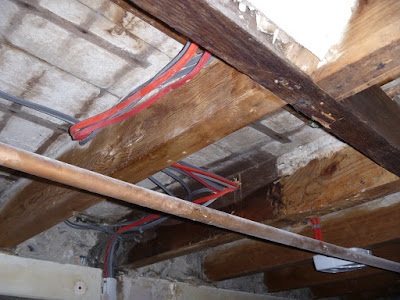 Only new wires along the living room ceiling! 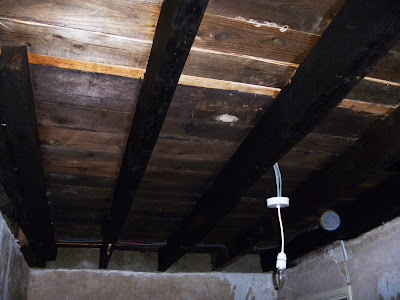 The landing looks even better!

When, back in May, I got the quote from the electrician I got a bit nervous. These people don't come cheap. But I had contacted him for work in April, got the quote late May, and he only finished the work in late September, so I didn't have to pay it particularly soon. But he's done now. I am enjoying the plethora of sockets, and the additional light switch that makes my journey to the bedroom in the evening nicer. And the house is a lot safer now!

Paying the bill was a big chunk out of my bank account but thanks to parental support I'm not worried about that! Bring on the plumber and plasterer, even though what I'll ask them to do is increasing all the time. I tried to remove a radiator for the plasterer and I couldn't, so that'll go onto the list of the plumber's work. And with the electrician adding lots of sockets he also made extra holes in the wall the plasterer has to fill!

And when these are done then I need to get me a painter! If I do to all myself it will take forever. And then I can ask the joiner to come back for the floors! And some more work...
Posted by Margot at 09:52