It was a hot day! It was good to leave the office early and get out into the sun. And Eifion had picked a magnificent venue! We would be climbing some crag in Nant Peris. It's such a beautiful valley! 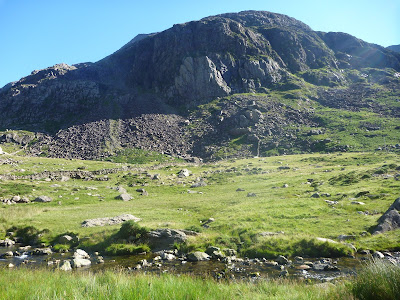 View south of where we parked 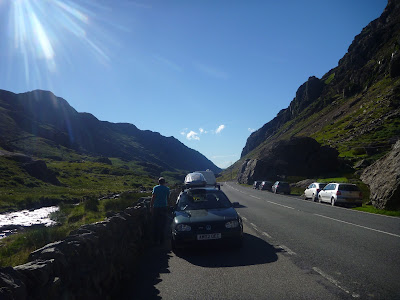 View west of where we parked

We got there; soon we all had bottles of sunscreen in our hands. We would need it! The person with the kit was coming a bit later; she struggles to leave work early enough on Mondays. So we waited for her, admiring the view, and other climbers visible here and there. When she arrived we could go and lug the kit to the crag. And then the laborious rigging started; this was again a trad-routes-only crag. 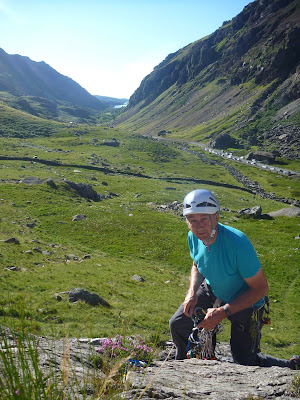 Eifion rigging in the sun

It always is some faff. We would need many routes; we were with many! I had a climbing course coming up so I paid attention. I don't think I'd rig in that ultra-safe it it was up to me; I'm a mine explorer, after all. I was trying to curb my impatience! And I managed. By the time the second pitch (we would do three) was done I went down to start climbing. I ended up climbing two pitches twice and one once; a good score! With the pitches I did twice I just muscled my way up the first time, and tried to climb more technical and elegant the second time. It was fun! 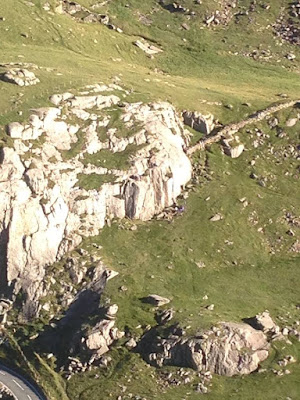 Some of the climbers on the walls much higher up were associated with the same club! And they took this picture of us. 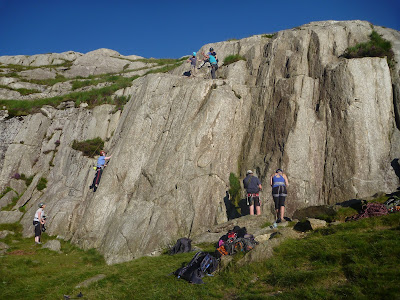 The first two pitches are rigged; the climbing has started!

Something that wasn't much fun was that later on, the midges came out. I was wearing a tank top and shorts, so they could take their pick. And when you're belaying someone, you have your hands occupied, and you can't chase them away. Oh dear! But it was a small sacrifice for a lovely night. 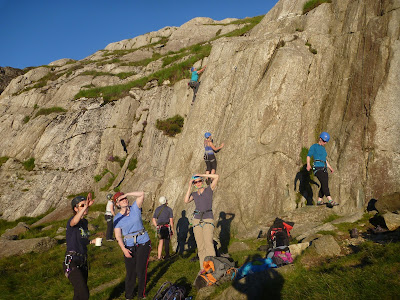 When most of us were tired and all of us were fed up with the midges we called it a day and started to de-rig. While we walked back to the cars the sun set behind the hill. It was gorgeous! 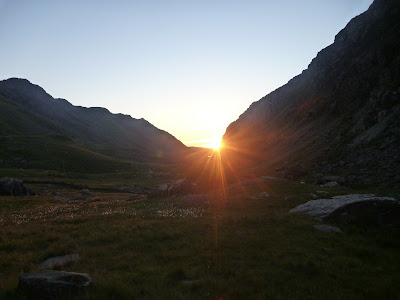