In December I wrote about my liaison with the commercial company up the road. And then all fell silent! But that was only on the blog. We got a student for that project! His name is Joe and he likes forams. Great! That meant all was lined up for a lovely project. Now we needed forams. Ad for that, we needed samples, of course. And we had had a chat about that; we wanted to get the proper samples with our 'large' vessel, the Prince Madog. At 37m she's very small for a research vessel, but our other option was the Macoma, at 8m. That's yet another category of small! She's less advanced and can thus take samples with lower precision, and can only handle small sampling equipment. But it's easier to find a day to go out with the Macoma. The Madog is bigger and thus more expensive, and often goes out for an entire week at the time. That's hard to accommodate!

One Tuesday I suddenly got an email from Mike, the intermediary between me and Joe on one side and the company on the other (if I can call him that), that the Macoma would go out the next day. Would we want to join and take some samples? I thought we should take that opportunity! And I expected a response from Joe. Nothing came! Then I saw him come into the corridor. I knew where he was going! So I followed him and asked him if he had seen his email. He hadn't! And he didn't want to go out. He was in the middle of exams; he would have one in 20 minutes! And not be done until 5. I was feeling it. I want to know if these samples will be any good! Before you know it they have no forams at all. Then we need to think quick! So I told Joe he had to send us coordinates of where he wanted these samples taken. He'd do that after the exam. And I started hunting down sample containers and accoutrements. I sent my apologies to the organiser of the meeting we'd have that next day and phoned the boat technicians to ask when I would have to be where.

The next morning I stood with my bag full of stuff to read (we'd be out for 5-6hours), and food and drink, and warm clothes, at the end of the pier. I found Aled there. He and Pete would be my skippers! 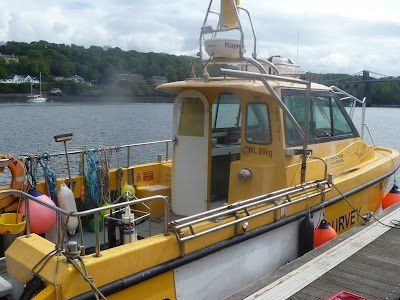 We loaded up, and I put on a buoyancy aid. And off we were! It was lovely to see Menai Bridge, Bangor and Beaumaris from the water. And the sea was like a mirror! With porpoises jumping through. We'd do the samples first. And then some plankton sampling near the Great Orme and Puffin Island the men had to do too. After about an hour Pete asked me to make some coffee. I'm glad I have steady hands! By then we were out of the Strait and the sea was bumpier. And we had biscuits! Pete is one of these people with a high metabolism so he had five or so. He needs food all the time! I stuck to one. 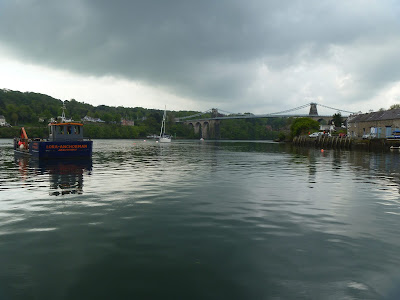 The bridge from the water 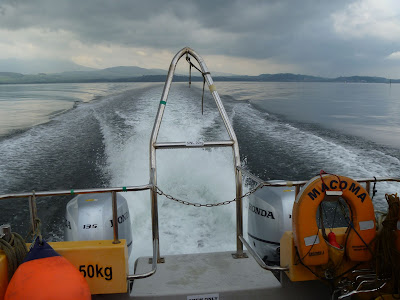 We spent the time trying to find out where to go. Joe's coordinates seemed a bit off, but the Macoma is advanced enough to know where the shipwrecks are, and can just sail to them and take samples around them. So that's what we did! About 11:45 we reached the first wreck. Time to sample! Aled tried it with the small grab first, and that didn't work. The he tried the big one and we had a lovely sample! With lots of brittle stars in it; I threw them back. They are sturdy creatures and I think they can cope quite well with being pulled from 43 m depth to the surface and then thrown back. Then I filled a sample bag! And then I had to quickly clean the kit for the next sample, and take notes, and label up the next sample bag. It was hectic work! But it went well. The first four samples were in! 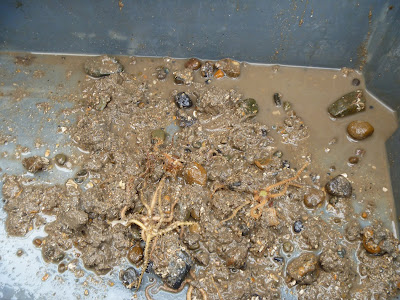 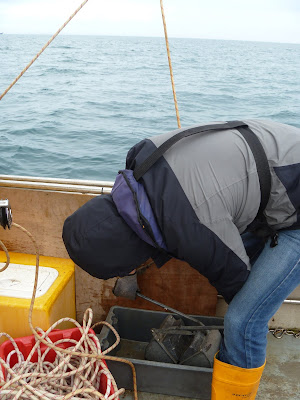 I thought I'd be hungry by the time we had that done but I wasn't. Nor was I thirsty. I felt fine but the moving boat was affecting me anyway! I didn't have another explanation. Since when can I make it to that hour on only a small cup of coffee and a biscuit?

Pete said we didn't have time to go to the second wreck site, but then saw it was on the way to the third, so we could do it anyway. And another well-oiled session followed! And then a third! We were on a roll. But I still wasn't hungry or thirsty. I had a small cup of tea (that Pete made) and that was it. Pete ate half the world in that time.

We then went to the Great Orme for the plankton. There were gannets and razorbills (I think) and whatnot all around. The sampling there was quite quick. And the one at Puffin Island too. Then we sailed back. I had never seen Puffin Island from so close up! It is beautiful. But I was glad to go back. 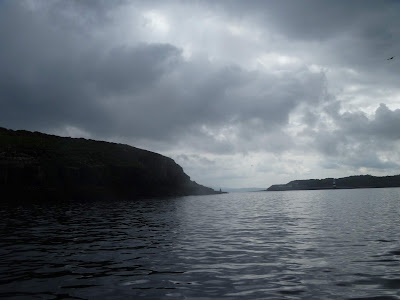 When we docked we took everything off the boat that needed to come off and put it in a cart. Pete helped me drag it up the slope of the pier (it was low water) and then left me to it. He and Aled still had stuff to do with the Macoma.

I went back to the office. Just when I got in I saw colleagues file past; they had been in the meeting! I had had a more scenic afternoon. And now I needed lunch. I was back on land and life caught up with me! It was 4pm so it was about time I got some calories down. And then I hope Joe will soon have time to go and have a look at these samples! I hope they are good!