Exploration to the end

Thursday trips tend to be rather spiffing, but I find them extra exciting if we are about to explore a particular part of a mine of which we have no idea what it'll bring us. This week (or rather, the previous week; the blog is suffering a bit from a time lag) we had one of those. As I explained before, we had found a mine that nobody knew much about, and we had explored its length, but not yet its depths. We had dropped from entrance level to a sublevel, and we had seen two possible ways further down, but hadn't had enough kit with us. This time we did! We rigged the place and went back to the sublevel. From there we first tried the most promising route; down a hole in the false floor. Water coming out of the ceiling chose that route too. It would be a wet abseil! But probably worth it.


We first tried to go in the direction back to the hillside. It ended in a collapse, but we knew we might be able to drop down an ore chute and get to the other side of that collapse via that route. Then we tried the other way.

The level had many side tunnels; all of these had a dead end after only some tens of metres. It didn't take that long to explore. But we found some nice features and artifacts, such as a strange puddle of white liquid, a pipe, a pocket knife (clearly postdating the working of the mine, but we knew that we were not the first people down here, although we must be some of very few) and another wheelbarrow. But it was time to go back up. 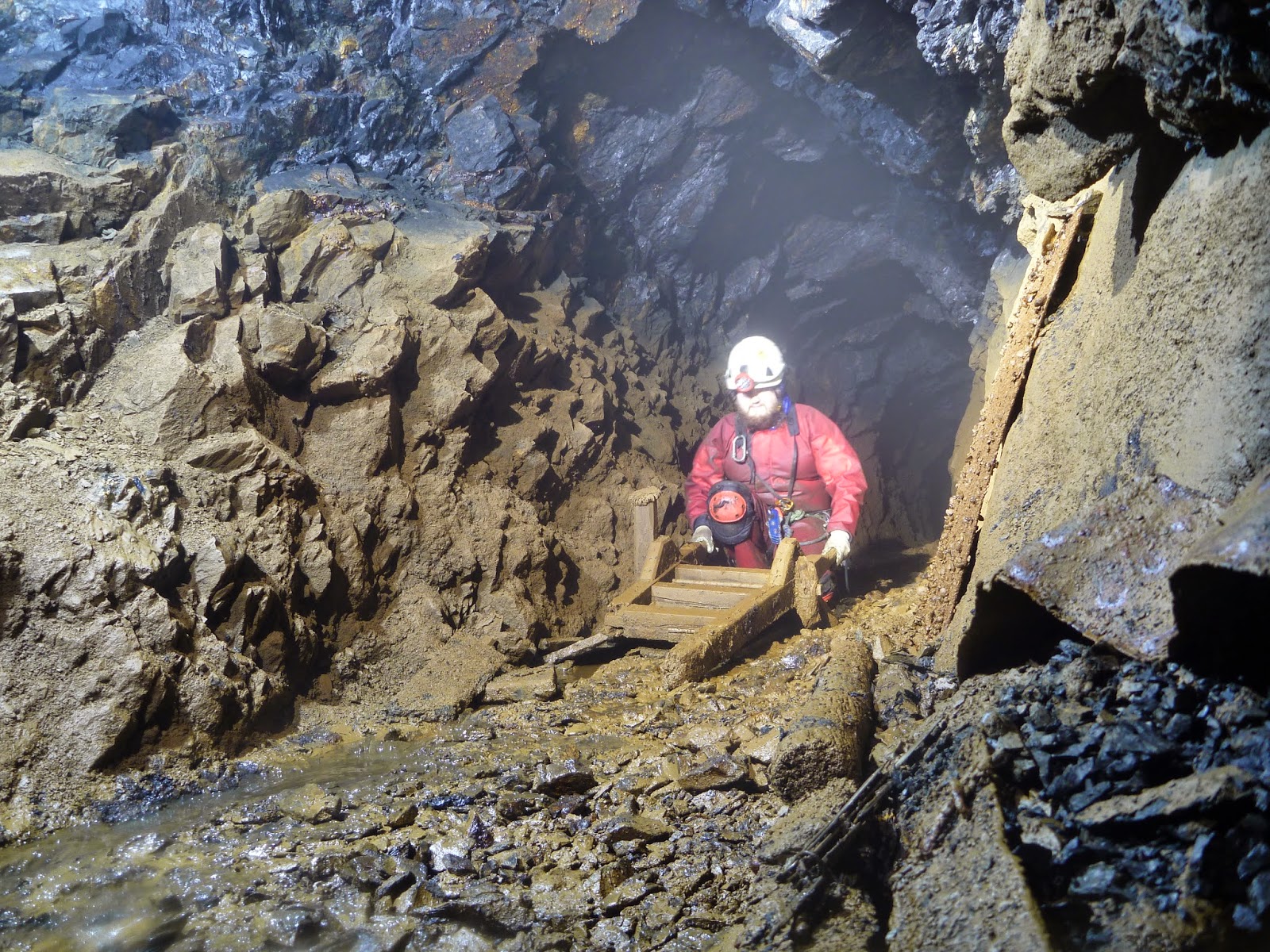 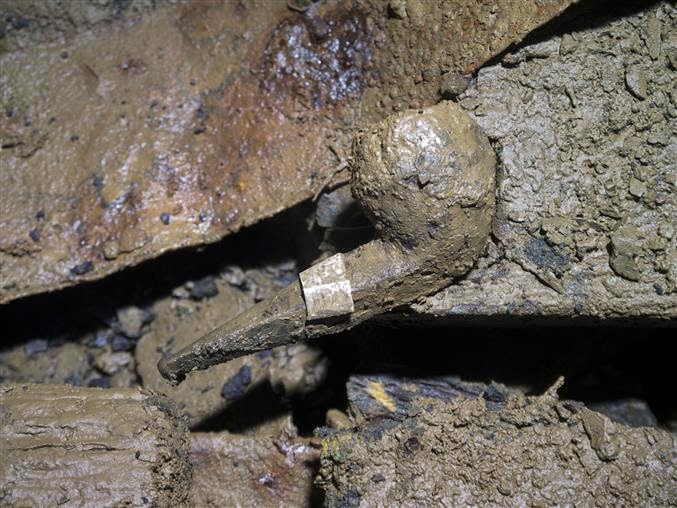 Prussicking up with a waterfall isn't very nice; it's cold and it impedes breathing. The first two guys managed anyway, but the third struggled. He had worn himself out by the time he reached the most unpleasant height, with most water coming down on his head. It's scary if you see someone struggle, and you know you can't reach him! The only thing we could do was shout encouragements. Luckily that was enough. And then we were up rather quickly. I almost caused more trouble; prussicking is easiest if there is tension on the rope. When you're high up the weight of the rope provides that, but low down it can only be provided by someone holding the rope. David held it for me when Phil pointed out my leg was on the wrong side of the rope. No problem; I swung it around. And almost thanked David for his kindness with a clanging kick in the face, with my sturdy steel toe boots. Oh dear! Fortunately it only ALMOST happened. And by the time I came up I noticed there actually didn't seem to be that much water coming down; when I stuck my head through the hole in the floor I saw why. The men had diverted the stream! How nice. And now Dutch. 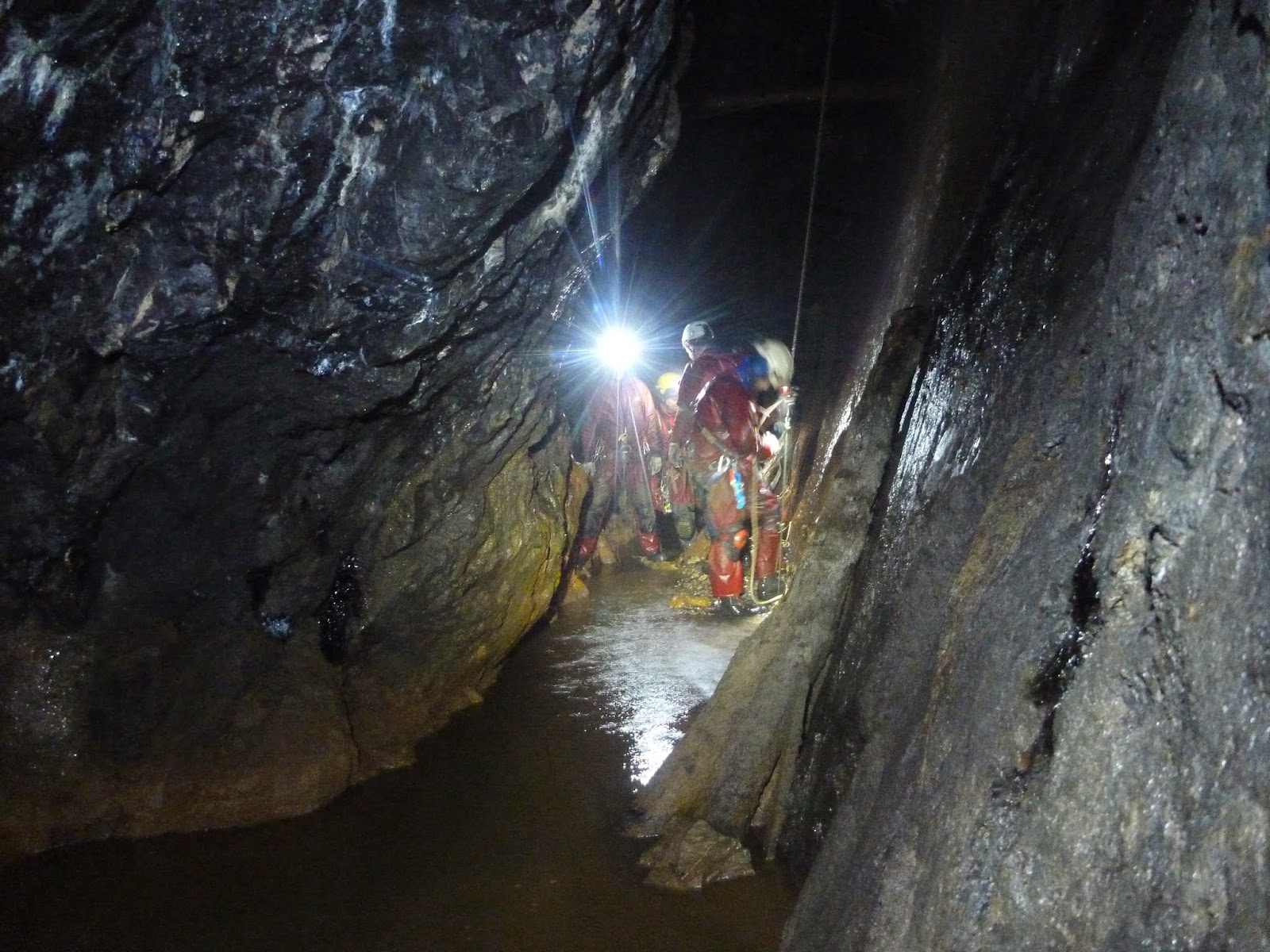 Blober getting ready to ascend again 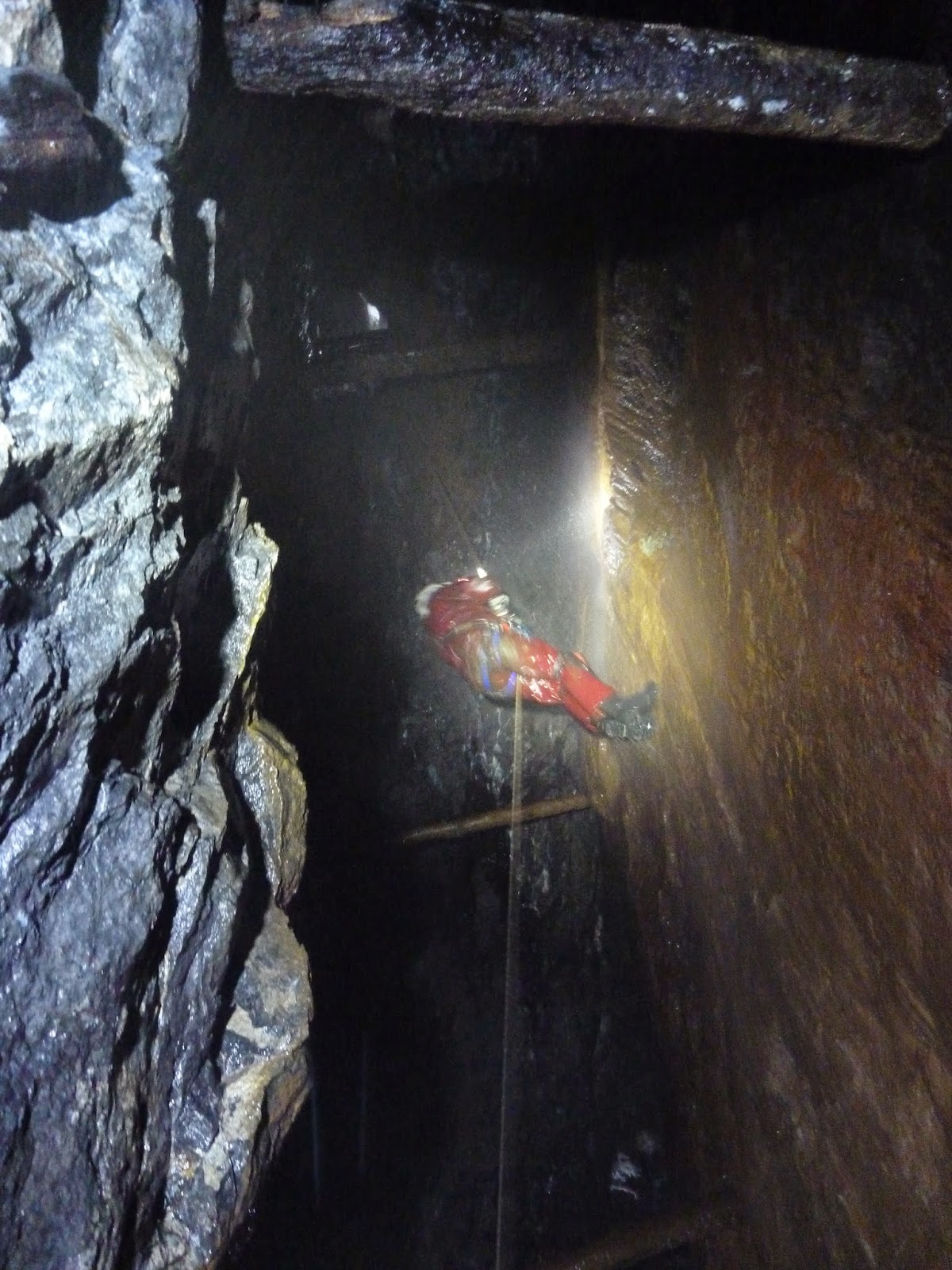 I wondered if anybody was up for dropping the ore chute too. I was generously waved into its direction; I was welcome to see if this evidently somewhat uncomfortable drop was possible. I didn't need much encouragement!

It was an awkward drop with squeezes past, and clambers over wobbly timbers and past loose rock. I hesitated a bit but decided it was safe enough. I didn't expect anybody to follow, but soon Phil appeared too. And then Simon! And David! A veritably stellar cast. 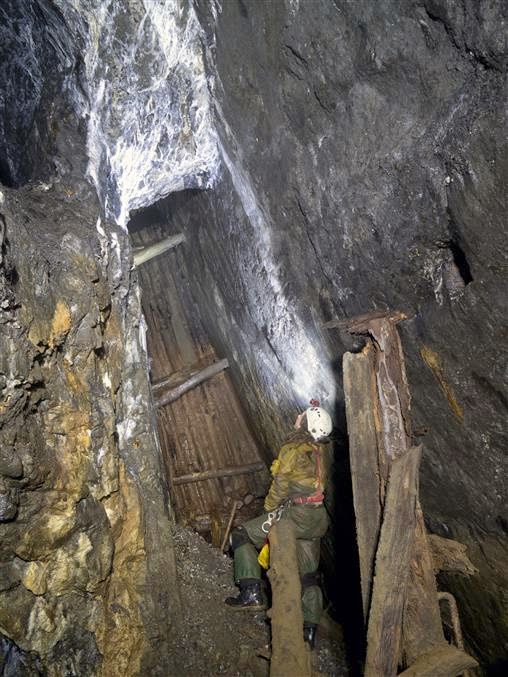 Me staring up along the ore chute. Pic by Simon. 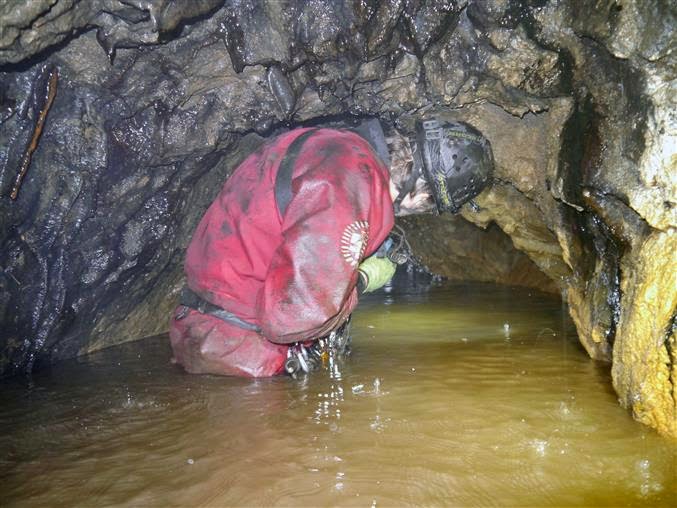 How much deeper does the water get? Pic by Simon. 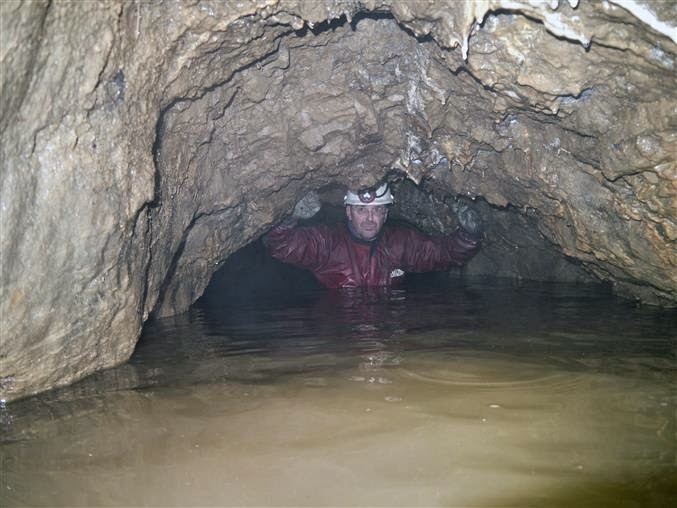 Quite a lot deeper! Pic by Simon.

We admired the spade and collapsed ore chute we found, and then it was time to explore the level going further in the direction of the hillside. The water was a bit deep! And cold. And it got deeper. It ended in a collapse. This was the end of the mine. We've now seen all that is reasonably accessible! A good night. And we all got up without problems. I even thought I saw a reduction to the water coming down the chute; I think the men had re-directed it down the hole we had first dropped. Such water engineers! And were even out early enough for a half pint. This is our last regular underground Thursday night trip of the year; a good closure!
Posted by Margot at 10:40