A new mine! New to me, anyway. That still exists around here! The Thursdaynighters would visit Foel Gron, which is a small slate mine in the middle of nowhere. And that sounded nice! And not actually further than Blaenau Ffestiniog. We had been in that neck of the woods before and the sheer emptiness of the landscape attracted me. The last time we had been there it had been winter still, so now I actually drove up in daylight. And I could see the amazing views! And the venue had been proposed as one of the chaps had been there before without kit, and seen a drop, and wanted to explore that now.

I was the first to get there but David was right behind me. And then Edwyn showed up. This was the first time we’d see each other after the fiasco with the pannier rack. He parked next to me and wound down the window. What was this; was he afraid of getting out of the car? What does he think I’d do? He asked if we would fight. I said I hoped not. Then he came out of the car and I gave him back the ill-omened bike part and we went about our business.

Miles also showed up. He gave me back my drill! When I had told him it didn’t work he volunteered to have a look. And he’d fixed it! He didn’t know how; he had not found any fault with it. But he had diagnosed some rather dirty contacts so maybe that was all it was. Now it can serve me for many years more!

Then we went up. The first entrance we saw was a wet adit. Not everybody fancied wet feet but I had come prepared and was wearing neoprene socks. I went in with Jason (who wasn’t). It went quite far and split, but looked backfilled right behind the junction. When we came out only Paul was waiting for us; the rest had gone on. We caught up. We saw a big entrance and went in. It was nice! We identified the tunnel that probably went to the drop but we explored the rest first. Some nice levels with white precipitates in the water.

When I thought we would go and rig that drop it turned out there was confusion. Was that drop where we thought it was? Probably not! He had misremembered. Oh well. We explored the tunnel anyway (no drop there, but a nice small chamber with chains) and then went higher up the hill for some more entrances. The place had been untopped so chambers and levels had accidentally become entrances. We went in and found a chamber that lead to daylight, but we couldn’t reach it. We went out again. There was an entrance on a slope and I didn’t want that to go unexplored so I clambered up. I ended up at that daylight we couldn’t reach from inside! Now we know that too. And we looked at one more adit (which turned out to be extremely shallow) and that meant we had seen the place. Time to go back to the cars and change out of our wet cold kit! Or at least, Jason’s and mine was wet and cold. On the other side of the road there was another mine I had never visited; the TN had been there not too long ago but I had missed that trip. But I’m sure I’ll get to see that too one day. A nice evening out! 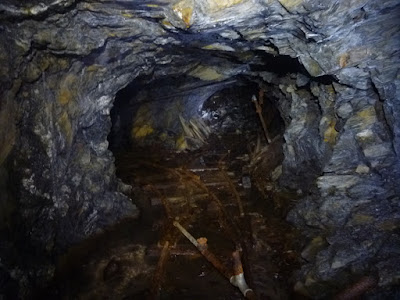 Where the lower adit splits 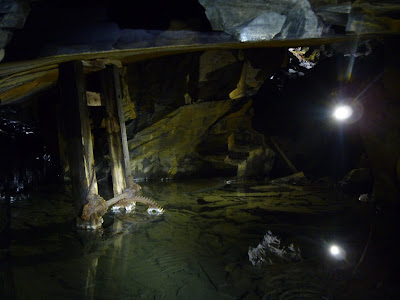 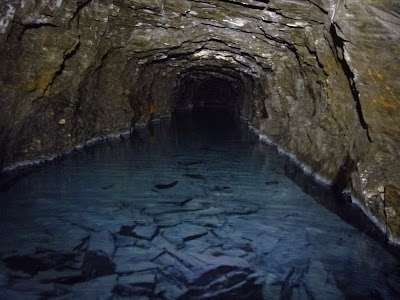 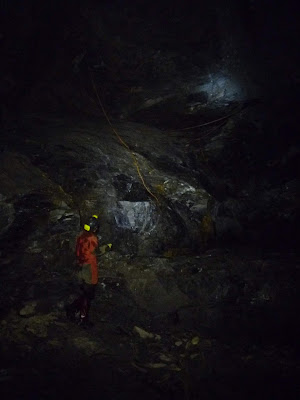 Jason in chamber with chains (I should have brought a tripod) 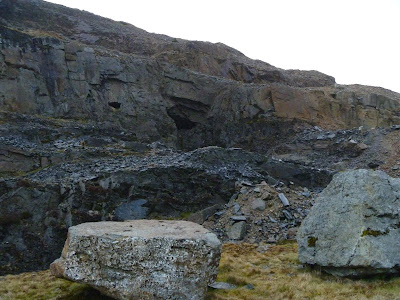 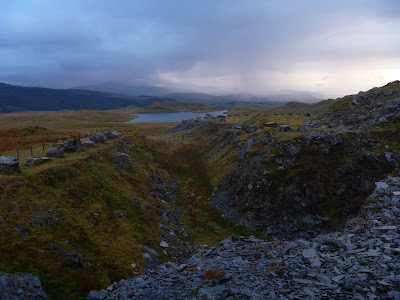 View from the high entrance