When I bought the house, it had a big industrial strip light in the kitchen. And that stayed until September! Luckily, by the end of that month the electrician had taken that out and just dangled a standard light fitting down, to which I added a lampshade. But I did notice the difference in light intensity. Unsurprisingly! So when I saw a discounted lamp that had three jam-jar-like bits I thought that would be an improvement. The lampshade was opaque so didn't let light go sideways, and the clear glass jam jars would not have that issue. And as there were three of them, you could let that radiate a lot of light! So I bought it. But of course, the ceiling has a looped circuit and the lamp is not compatible with that. In the living room I found one improvised for that. In the kitchen I would do another!

My plan was to leave the old ceiling rose in place, and just mount the other ceiling rose cover over the top. I could just screw two brackets into the ceiling on either side of the ceiling rose, and fix the cover to that. And it worked! It doesn't look immaculate, but hey, what does. 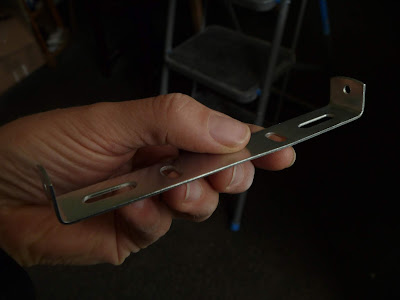 This was the bracket the lamp was supposed to hang from. But you can't put that up over the ceiling rose! So I decided to only use two right-angled brackets, one on either side of the ceiling rose. 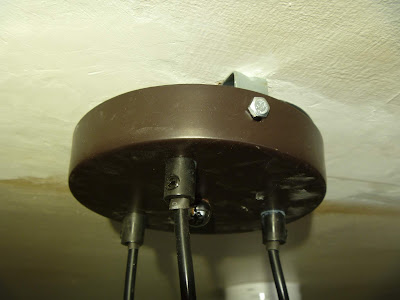 It works! The bracket you can see doesn't  reach to the other side 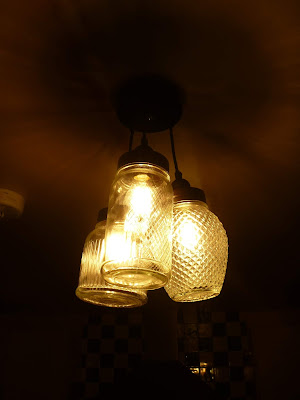 The one thing I need to sort out is that the three wires are height-adjustable; I'm not yet happy with the relative height I have them at. I will have to tweak that! But the structure is sorted, and the amount of light this set-up produces is amazing. Mission as good as accomplished!
Posted by Margot at 06:52