Once every ten years I seem to smash a cover of my indicator lights! I had done this with the font of my old Subaru in the first months of my driving career. And now I did it again, but now with the rear of my Citroen. I was heading for the HR building as that's where Jenny has her office; I would see her as part of my A level exam. Next to that building is what's known as 'the inclined car park'. It's only for people with good hand brakes! I flashed my staff card at the card reader but it didn't budge. Hmm. Not good! But there is a car park on the other side of the road. I backed out of the entrance to the inclined car park to get to the other one. And misjudged the distance to a rather pointy bollard. Oh dear! The cover of my left indicator light was smashed. And the bumper had a hole.

When I was done with my conversation with Jenny I popped by the nearest supermarket and bought the only tape they seemed to sell. Masking tape! I taped the dangly cover in position and got home without it falling off altogether. There I quickly found a new (well, used) cover on eBay and ordered it.

A few days later it arrived. When I had a look at it I saw it was a cover, with a unit clicked in place that actually held the light bulbs. When I found that out one of the brackets spontaneously fell off. But my own unit was undamaged! So I swapped them. And tried to assemble a full set of working light bulbs. That almost worked! One missing. Now I had to install it!

It is supposed to click in position with two metal clips, but I couldn't get it to click. Maybe some of the metal had bent. In the end I used the one clip, and sellotape for the rest. Didn't look so bad! But not ideal. I went to David for advice. He didn't really know; he's not good with plastic cars. But he did suggest I fill the bumper with bubble wrap. I had suggested a towel but he pointed out that gets and stays wet! Bad idea. And he had a spare light bulb!

I went home, took the tape (and some car paint) off, put the light bulb in position, tied some polyprop to the clip that didn't work, and attached that with cable ties to a convenient loop in the floor of the car. Solid as a house! And I did the bubble-wrap-and-tape trick and now my car is all MOT-worthy again! Hurray! I am getting marvellously good at indicator light cover repair... but I hope I won't need that skill too often! 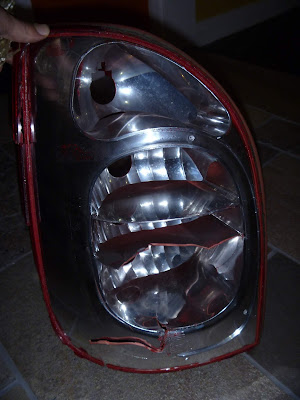 What was left of my own cover 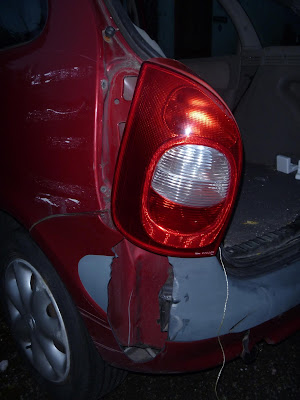 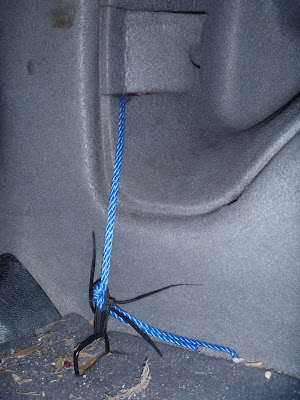 That's how you fix a cover 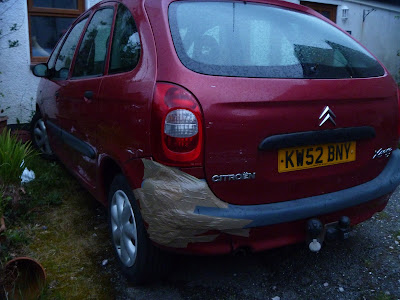