I went like the clappers! I had three exams this spring. And a most fortuitous combination of three! Two were three-marker-exams, so you only mark a third of the questions, which of course only takes a third of the time. And one of these was a very small class. And then the third was MCQ, so some computer marks it. Great! When I got the exams I had to mark in I immediately went for it, so I could given them to the other two markers soon. It's always a bit of a faff to push them from one person to the next! And you can bet on people missing a question here or there so some to-ing and fro-ing is expected. But this time it went OK. And as soon as these were out of my hands I swapped to dissertation marking. This year I was supposed to mark 3 dissertations by my own students and 11 by other people's students. But I had three non-submitters. So only 11 in total! 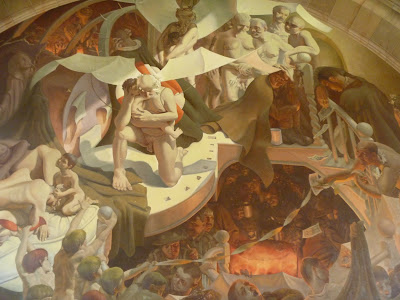 The MCQ exam was in one of the elaborate halls in the main building; it has this somewhat unsettling mural on the wall at the top end of the room.

One sunny day I stayed home. If I would have commuted to the office it would have been almost two hours spent on that. Now I could spend these hours marking! I had allowed myself three print-outs; I could do these in the garden by the river. Lovely! The rest had to be done in my home office. Not as glamorous but well, nice enough. And I made good progress!

Two days before I was due to fly to the Netherlands I finished the last dissertation marking. And got the piles of exams back from my other markers! But it was too late to do that that same day. I also got a script from a student who had done the exam in a separate room. And the day before I would fly I was quite busy; the day started with the last exam (the MCQ one). Then I had to get to Menai Bridge as the MSc students were doing their literature review talks. My student was before lunch! So I dropped my bag in the office and went.

When the talks stopped for lunch I had a few minutes to warm up my lunch and then we had a weekly lunchtime session. We do these to disseminate good teaching ideas. This one was interesting! About how to use the online-marking-software the best way. But as soon as we were done the talks started again. I had no more students but I knew they were short on staff in this session so I went. But before the last talk of the session I sneaked away. I needed to get to one colleague who needed to mark the stray script and who would probably be in the last session! I caught him and gave him the script. And then I started collating the grades. It was clear some questions had fallen by the wayside. I would have to sort that! Preferably before I would leave. But time was running out! Luckily, the colleague who had missed the last questions left the talks before they were over too. She marked everything that still needed marking. And we sorted moderation; I checked the others' work and she checked mine. Good! This could go back to teaching administration. And then I collated the grades from the small class. It was fully marked! I set up everything that needed setting up for moderation and plonked the scripts in a colleague's pigeon hole. By then it was so late I couldn't go underground anymore. A pity! But I was glad this exam stuff was sorted before I would leave! And the day after I managed to agree marks with other dissertation markers of all but four of the dissertations. Success!
Posted by Margot at 07:13