I had painted the stairs to the garden as a prelude for making it mother-proof. But the main task was making a railing! I had tentatively thought of two stakes as posts, but they were too short. Then I bought a 1.80m post and sawed a point on it. I rented a drill and bought some fixings and masonry bolts. Then it rained for a day. The day after, I hammered the post into the ground (as far as it went) and fixed it. That involved getting very up-close-and-personal with a shrub and being as uncomfortable drilling in slate as I normally am in the dig. But it worked! It's solid. And I have some cement standby for in case I want to fix it at the base too.

The next Monday I went and bought another post. It clearly needs two. Then work happened; it was Saturday by the time I sawed a point on that one too, an hammered that one in. And the fixing was not as bad as I had imagined. I bolted it to the top of the step so I didn't have to drill from inside that already quite pesky shrub. It was solid enough! And again, I can always add cement.

The it was time for the handrail. I had bought some special handrail brackets! And it's always difficult fixing something on your own; you have to hold it in position with one hand while marking where the screws should go with the other. A faff! But I managed. Both stakes! And I filled the gap between the two with wood filler. Sorted!

The only thing now is to fix anti-slip to the steps. I had tried soem stretched metal but that retained too much water and I feared it would make the steps rot. I bought some lighter stuff and will see if that's better. It's easily screwed into the wood, but it may be difficult to do that with the slate. I don't want to have to put big masonry bolts in! And I don't think small masonry bolts exist. But I will think of something. I might juts put grip tape on. It lasts for about a year, and that'll buy me time. And with rail and grip I am ready for an important guest! 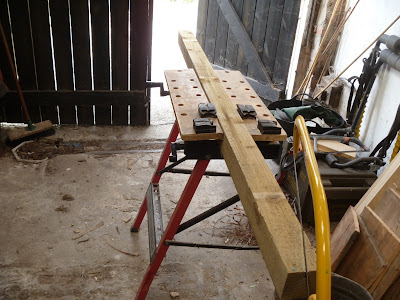 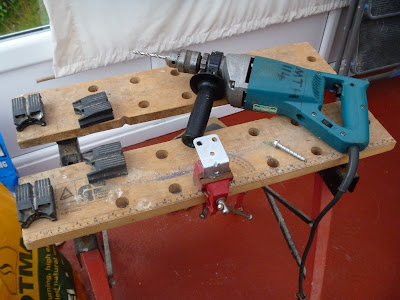 Drilling out the holes in the brackets to fit the bolts 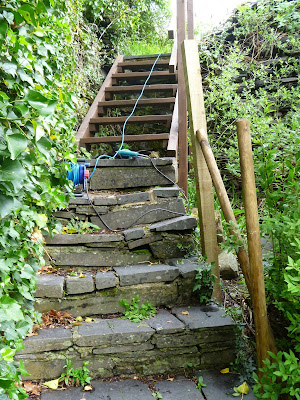 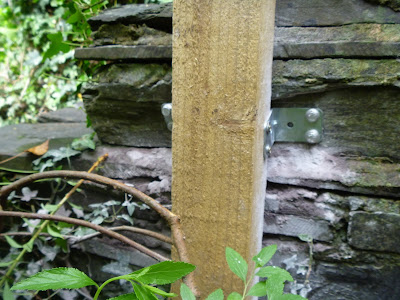 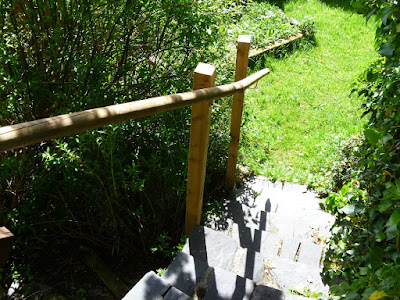 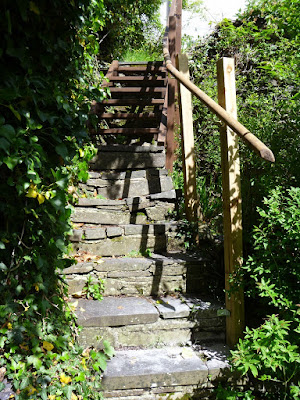 End result from below!