Vote as a citizen or resident?

Some time ago I chatted with another University employee from the mainland. She was applying for UK citizenship! She explained why saying 'these Brits need help voting'. And I agree! They sure do. In a way, I prefer to vote as British as I can. I am a bit detached from Dutch politics! And what affects me every day is UK politics. And the only election in which I can choose is the EU elections. If you are a citizen of one EU country and live in another you can choose. The previous time I voted as a Welsh resident!

The the UK decided it wanted to leave the EU, so when I moved and told the electoral register I did bring up my EU vote. The person on the phone said it was irrelevant as by the time there would be EU elections again, the UK would be out. So I moved my vote back to the Netherlands. But now we're not out! But I stuck with my orange vote. The UK might still be out soon. A UK vote could be for someone who might be elected but never ends up taking the seat! That's not much value for your vote. And I think the Dutch have seen what a tar pit Brexit is and won't risk a Nexit. Or Hexit. So my Dutch vote should go to someone who, if elected, actually stays in Brussels/Strasbourg for the full five years. And then we'll see how Brexit pans out... 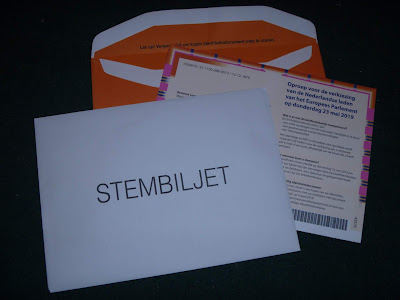