I hadn't gone to a gig since July! Maybe that's silly. I did enjoy that one! It's just that I like to go to bed early. But I had seen there was another gig due, and the music had sounded OK. And Dilwyn had encouraged me to pop in (as usual). I had had Jaco and Marjan over (two weekends in a row; they had their kitchen re-fitted so they were keen on using other people's kitchens, including washing machines) and they thought it sounded nice but they were not up for going in. But I was! When they had left I phoned my mum and after that I popped in. And it was nice! It was Don Kipper, and they were good. It's a multinational folk band. They played some songs of their own, but also songs (traditionals, I suppose) from (in the time I was there) Albania, Armenia and Turkey. So they had a wide repertoire. I was on the dance floor in seconds. But I came off when the Turkish song got into gear; that was a bit too complex a rhythm for me to tune my feet to. I'm not very musically advanced! But it was fun. I didn't stay until the end; my bed still calls. But I should do this more often! 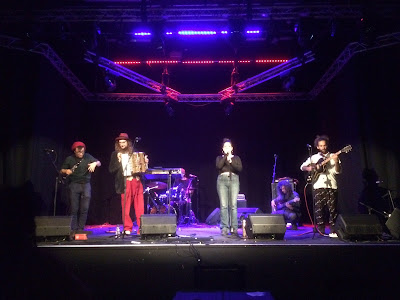 Don Kipper on stage
Posted by Margot at 06:37