It's been a year! Soon after I bought the bike I tried to put a pannier rack on it. But it wasn't suitable! Then I thought of buying another one, but one of my underground mates, said he had an old one in the attic and I could perhaps have that instead. So I refrained from buying one. But then I don't see him that often, and he sometimes forgets, or he doesn't know in advance he'll see me, and all that sort of stuff. And that way a year passes. But recently he did give me the rack. With bag! And that weekend I mounted it. It was lovely to bike to work without a bag on my back! And it didn't all go as planned; there had been a mechanisms to keep the bag attached to the rack, but that wasn't there anymore, and the bloke had improvised something. But his improvisation turned out to be inadequate for the bumpy bicycle track! And the bag came off. Oh dear!

When I sent him an email to thank him he said he was pleased I liked it and that he wanted £35 for it. I was a bit surprised; he had never mentioned money before. But, fair enough! But I thought £35 was pushing it a bit. The stuff looked decades old! And it needed a new mechanism. I decided to send a counter-bid. I went a bit lower than I was willing to pay, as you should not start a negotiation with the amount you want it to end up with. But that rubbed him the wrong way! He said my offer was too low and could he have the stuff back please. I was a bit flummoxed. If he had an nonnegotiable price in mind, why hadn't he told me that before I mounted the bloody thing onto my bike? I am now a bit grumpy as I think he could have saved me the effort by talking money and his rather specific demands a bit sooner, and he is (apparently) insulted by my offer. Great! That worked out well. No pannier rack, and two people who have been antagonised. Not what I had in mind when I decided to drop buying one commercially and wait for his set-up to reach me! But well. At some time convenient to me (I'm not going to rush; this process has already taken a year, after all) I'll take the thing down and give it back. Then it can go back to his attic! And, over time, the antagonism will fade... 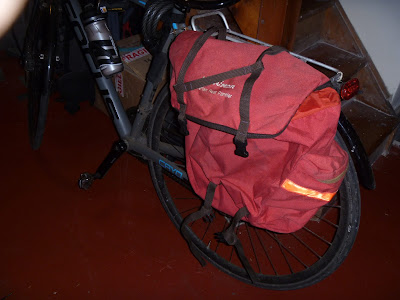