I had missed the last rescue training, so I figured I should be at the training preceding the AGM. And I did! It was a bit hectic; in the morning I did last year’s Welsh A level exam for practice, and from there I only popped home for a few minutes before heading for the training. David collected me. When we got there, there was a bit of a discussion on what to do. We decided on one session on communications and one on hauling with counter-weight. I started on comms.

We didn’t actually have the equipment we had hoped to use, but that’s OK; we did a theoretical session. We started with how a call-out actually works. We tend to forget to talk about that! What happened before you get the call-out on your phone? It starts with the police, but who do they contact, and what decisions do these people then have to make and how do they make them, et cetera.  Under what circumstances does such a call land in our phones?

We also discussed what means of communication you can use for what; VHF radio is not secured, so you can’t use it for sensitive information. And what information is sensitive? And things such as: what channel are we on, why are we there, what are the drawbacks of that channel, where can we go to if needs be, who else is on which one, and such things. Time flies like that! Then we packed up and went to the climbing wall to see how the haulers were doing.

We had a bit of a look but after a bit we were shoo’d away after a bit as the other group wanted to debrief and did not want to provide spoilers. Then we came in! The ropes were rigged. Gethin told us what the idea was. We would try to haul up someone to the platform close to the ceiling, with another person as a counterweight. As the hauled person going up means the counterweight goes down, you have to prussic up the rope as fast as the other people are hauling to make sure you don’t end up on the floor with a slack rope. And that’s hard work! We first practiced prussicking up a rope in an easily reversible way, so with something other than a chest jammer. I tried an S-Tec flow first, and my Petzl Stop (but only partially rigged) second. That worked! But then it was time to try it for real with a person.

I went up the ledge. I would be hauling! And it turns out that’s the easy bit. Ed was doing the prussicking and he had a hard time of it. And when we had Gethin up we released him again. All worked well!

Then I went down to let someone else haul and ended up being the prussicking party. It is indeed much harder work! But again it went well. This time Gethin rigged a stress meter on the rope. He could monitor exactly what stress we put on the rope and the anchor and how that developed over time! The moment the prussicker turns around and abseils down seems to be the peak. Funny!
When it was about time to pick up we had to get one of the chaps down from the platform who had forgot to bring his Stop and wasn’t overly happy being lowered by Gethin. Then we could de-rig and put everything back in Gethin’s van. And then it was time for the AGM!

And there was trouble on the way; we fall under the umbrella if Mountain Rescue but it seems that may change. I am curious to see how that pans out!

A pleasant surprise was that I had failed to get the call-out text messages for years. When I bring that up someone tends to do a test-call-out and I always get that message. But never the real ones. I tend to have to find out through email or David who tells me. But now finally they figured out some tick box next to my name hadn't been ticked. Did that have to take years to find out? But better late than never!

Anyway. Another rescue year started! Let’s hope we won’t be needed this year. And that all mammals, both human and otherwise, refrain from getting themselves into a pickle underground! Even if that means I won't know for sure if I get the text messages from now on... 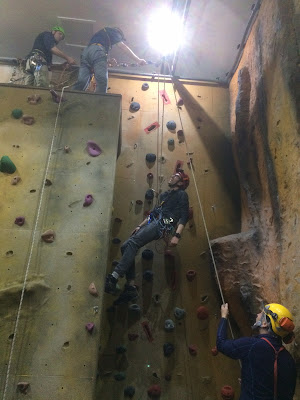 Hauling up Ed with Tony as a safety belay
Posted by Margot at 06:40