Once you live in a house you want to stay in for a while, you can invest in furniture you really like! I am not a big fan of large furniture as it tends to take two to move around, and I am only one person. Hence my habit of using simple shelving as places to put my clothes. You can take them apart and they become very easy to lug around, even up and down stars! I did buy a wardrobe to hang clothes in but that gave me enough headaches. But now I live in a house I don't want to leave for a long time so now I can consider having big lumpy furniture. If I can get it into the house I'm sorted! And a nice wardrobe looks better than bare shelving.

I had been having a look at furniture. Nothing floated my boat until I saw an advertisement for a whole set of home-made furniture, sold nearby. It was solid wood, it was white (which goes well with the blue bedroom), and it was the right style to fit. Not so old it would only look good in the old part of the house, but not so new it would look out of place in my house no matter what! So I responded. And we agreed I would pop by after the Open Day (I would be nearby anyway) and have a look.

I drove to the tiny village (I had run there once or twice) and had to phone for directions. The Google van doesn't go down such minute roads! But I got there and all was well. The lady was nice, the house was right beside a derelict windmill (great!) and the view was amazing. And I liked the furniture! I had my eye on a small wardrobe (I had done enough lugging of large wardrobes recently) and a chest of drawers. That should sort me out entirely! But then the question was how to get these into the car.

With taking the doors off the wardrobe, placing the drawers inside it, and strapping the door closed-ish we managed. And I was on my way! Very carefully.

When I got home I parked with the boot of the car close to the door. Bringing the chest of drawers in was easy. The wardrobe was a bit of faff but I did it! Then I had to decide where to put them. I did a bit of trial and error and got to a conclusion.

They were in position now but that wasn't all. I knew the wardrobe had a rail, but I already have a wardrobe with a rail. I was after shelves! So I took the rail out, and started on making shelves. I still had wood left over from my cupboard project; I used that for supports the eventual shelves would lie on. And I had lots of slats left over from doing a similar conversion in Plymouth. I had used some for my electricity-stuff-cupboard too! I sawed them to size. It worked out fine! but I had just enough wood for one shelf and I wanted two. I would have to pop to the nearby timber yard! So stay tuned; this is not over yet. But it's only finishing touches now! 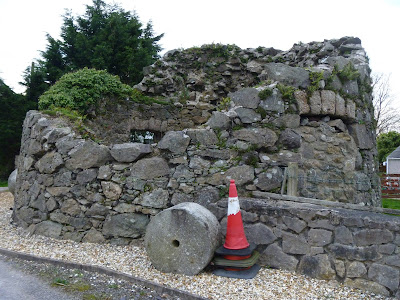 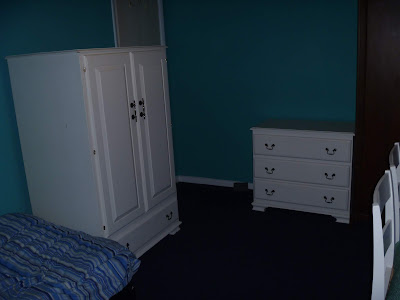 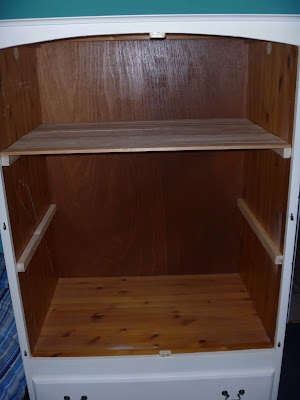