Shed waiting to be built

I like having meals in the garden when it's summer! And I have nice garden furniture for that. But using it requires lugging it down the slippery stairs. I figured it would be better if I kept it in the garden itself. But it needs a bit of protection! So I decided I could do with a garden shed. And I knew where to put it; close to the wall above which the house stands, there is a very big slate slab that would make a lovely foundation. I think it may have been a foundation before. The neighbour had helped put it there! It must have been very hard work.


I had a look at what was available. The nearby shops didn't have any that I thought would do the job. I wanted one that fit onto the slate slab, with the door on the narrow side, and which wouldn't get very bad reviews. I turned to a shop further away that delivered. And it came when the plumber and tiler were in! That was handy. The delivery man put in in the garage as it was open anyway, for the tiler.

When the tiler was done I took the shed out of the garden again. The roof leaks a lot, and I know that a shed is supposed to be able to withstand rain, but no need to get it rained on before it is in position. Furthermore, it was in the way of things So I moved it to the conservatory. To my surprise, it didn't come a a big box or bits with clingfilm around them, but loose components. Oh well! That's fine. But now I need to wait for a weekend in which I have time to build the thing, and in which the weather is OK. Could be a while! But until we get good weather I won't need the garden furniture anyway... 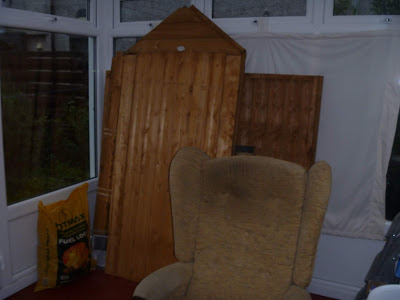